Pilbis Shonley is a character role-played by TheBigMeech. He tends to be the victim of terribly bad luck.

Coming from a rich upbringing, Pilbis' wealthy parents kicked him out from their luxurious home for being a perpetual disappointment with no job and no girlfriend.

Managing to find employment thanks to his former best-friend Robert Spowylamywanowski, Pilbis spent his early days in Los Santos as one of the original workers for the February 2021 re-opening of the Burger Shot chain restaurants' "night-shift." (Which is only a night-shift according to real world time. -1). Shortly thereafter, Pilbis rose from full-time employee to team leader-- eventually cementing a position from Kevin Whipaloo as a “night-shift” manager.

However, Pilbis' employment at Burger Shot was not without controversy. Blunt and confrontational, Pilbis easily pushed the buttons of his coworkers-- including establishing the now long-withstanding rivalry between him and fellow Burger Shot employee Kenneth Foreman. Consequentially, Pilbis' brash attitude made him an easy scapegoat for workplace drama; resulting in him being demoted, quitting, and/or being fired and then rehired several times.

Spiraling deeper into the world of petty crime, Pilbis reached a breaking point after being falsely accused of terrorism by his friends and (now) former coworkers. In a characteristic chain of unfortunate events, Ali Farmand, flying a hijacked plane dangerously close to Burger Shot, was shot down by Officer Garry Berry and crash landed in a nearby canal. Pilbis, arriving on scene with Leslie Lingberg, jumped into the canal with the intent to save the pilot and consequentially drowned. The LSPD arrived on scene moments later, with both Leslie and Ali naming Pilbis as the perpetrator. Finding the notion of framing Pilbis as a terrorist universally amusing, Rob and Leslie sought out others to testify against him-- in the end recruiting Ken, Oki, Shelly, Yeager, and Cece. However, all charges were eventually dropped and Pilbis' name was cleared (but not reputation).

Now vowing to become an actual terrorist, Pilbis seeks out revenge against all who have wronged him. 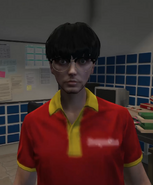 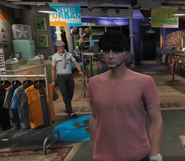 Pilbis getting eaten off of by four women 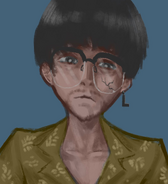 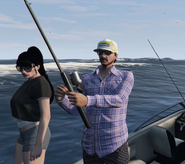 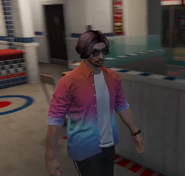 Pilbis created the persona Joe Laine (inspired by Joe Caine) to mess with Leslie Lingberg. Pilbis later revealed himself as Joe Laine because he liked the outfit

Pilbis' Ruiner that he bought and then later sold to Gus

After being spotted stealing a Shelly toy from a police cruiser, Pilbis temporarily became Bluebis

A meeting with the boys