Half Human - Half Angel

Brown Natural but Dyes it Purple

Basically, all the Aztecas and Australians since Peri has a problem with adopting strays.

Her friends and Family getting hurt.

Spiders and Clowns (only a little)

Peri Wattson is a character played by FallenangelPirex.

Peri is an employee at UwU Café.

Peri moved to the city for a new start, but to make friends and family. She wants to help in any way she can, even at the value of her own life.

She is very protective of those she sees as family but also as friends as she doesn't want anyone to get hurt.

She is always wearing a pair of gloves but also carries around a mask everywhere she goes.

She has recently taken it upon herself to haze all the new trainees at UwU with kicking a explosive crème brulee torch (Big Boom Boom) in the kitchen of UwU. She has lost count of how many trainees she has gotten to kick it.

She wears a face mask around the city after her face was cut from the corner of the lips up to the centre of her cheeks in a smile. She was cut while working on the floor of UwU by Rippy Bozo. She finds the scars horrible and hates people seeing them, so she hides them especially around her brother Francis. The Scar have healed and are now barley noticeable the only notable scar is now on her neck and that was from an accidental NoBalls to Dean Gullberry who sliced her neck open.


Peri was hired as an Intern doctor at Pillbox on 10th of February 2022 and on 25th of April 2022 she was promoted to Resident by Dr. Alexander Blake. 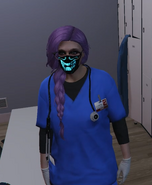 She was finally able to get her first charge on her record (not counting the one she got removed by Judge during burger court) by going 95mph on her way down to Dodo by a cop who was speed trapping trying to catch Dodo drivers out. She got charged with 1st degree speeding and 3 points on her licence.

"Sometimes it's better to hide behind the mask! Hide all my emotions... Its easier to hide the tears" ~ Peri when wearing the mask.

Peri was born and raised in England with her younger brother Dorian Wattson (DW). She had to drop out of college when her parents went missing. Her Birth name is Pandora Wattson.

To help raise her brother she got a job at a supermarket, a year after she started working there, she began to see reports of people disappearing before turning up dead. The community she lived in began to get more and more worried to the point no would travel alone. Peri thought things were weird and kept watching her back when going to and from work, she never saw anything weird until one day she returned to her apartment to find her brother bloody and beaten, she was lucky to find him when she did as he was close to death. It was then Peri noticed that the people who had disappeared had interacted with her before their disappearances.

A day after finding her brother she received a letter from the perpetrator. It was then that Peri decided she would move far away where this person could not find them.

Peri has a smiley pink and black mask on her which she has had since she moved to America. She wore it most of the time especially when her emotions were high or she felt like someone was watching her.

She took it off when she moved to Los Santos keeping it attached to her hip, only to use it when trying to hide her emotions or is very angry. She likes to call the mask Pandora like her real name knowing that when she is hiding behind the mask, she knows she is as safe as she can be when wearing the mask.

"Sometimes its better to hide behind a mask!"

The People who know about Peri's Past and her real name;

On 16th of May, Francis and Clarke both broke Peri down enough for Pandora to fully control the body. Pandora knew that Peri was weakened by all the emotions going through her head that she put Peri into a sleep for the time being. Peri cannot hear of see anything that Pandora is doing unless Pandora lets her. 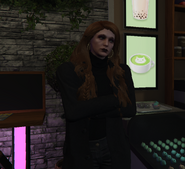 Peri has a few Vehicles but only three she drives more then others; 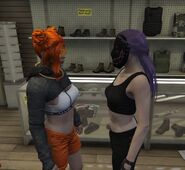 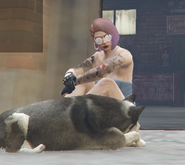 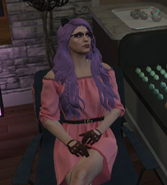 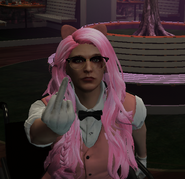 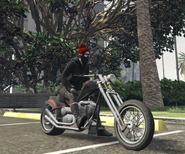