Penny Moore is 21 years old. She loves anime, pop culture, and she also lives in her mother's basement. Penny was informed by her mom that she needs to find a 'real' friend, or she'll get kicked out; thus began her journey forth to Los Santos.

While in the city, she met Dr. Andrew Ducksworth in the hospital, and became totally enthralled with him. Accidentally going on a date with Dr. Ducky, she also learned to drive in his dune buggy - but not before getting hurt.

Influenced by anime tropes, Penny seeks to add husbands to her harem. While Ducky is currently not in the harem, some suggest he might be... The Ultimate Husband. 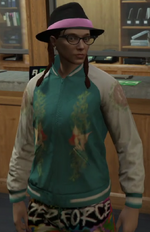