Patrick “Pat” Downing is a character role-played by Spaceboy.

Patrick Downing is a Solo Cadet for the Senora Desert Sheriff's Office, Badge #665.

He was formerly a Corrections Captain and Field Training Officer and then a cadet for the Department of Corrections, Badge #708.

After getting denied for Officer by the Los Santos Police Department, Pat set on a course up to Mount Chiliad, spending several months alone. Pat finally found his way back down to civilian life, and heard the news about the DoC program.

Pat was taking this opportunity with the DoC to get some baseline police work under his belt, in hopes of one day reapplying for full-fledged Officer.

During a prison break on February 2nd, 2020, Pat was gunned down on the outer perimeter of Bolingbroke Penitentiary while providing support and cover fire to the Police Officers further inside the prison. He was unresponsive and taken to the hospital with a very weak pulse.

Pat was admitted to ICU where he remained for months. He is now out of the hospital and is a DoC cadet with the hope of becoming a cop.

Pat has recently developed a hatred for Chatterbox, an unhinged man in a clown mask with a high pitched voice and wielding a hatchet, for his terrorizing of people at the Alta Street Apartments. This all culminated in Chatterbox's attempted kidnapping of Deputy Randy Wrangler out front of the LSPD where Pat was held at gunpoint, forcing Wrangler to obey. Pat was saved when a local fled the situation in their vehicle and struck Chatterbox, putting the clown over the hood, and dragging him down the street. As this happened Cadet Lenny Hawk ran out of the station to assist having heard Wrangler's disguised yells for help. With Chatterbox on his feet and taking aim, Hawk shouted for Pat to take his shot and he gunned the clown down. Doing so not only brought Pat immense satisfaction but it allowed Wrangler to have Chatterbox taken away for psychiatric evaluation, ending the clowns reign of terror for the time.

Pat was eventually rehired as a cadet for the Blaine County Sheriff's Office, although he was noted to have "bombed" his first interview, as stated by Wrangler.

Pat on the phone in MRPD posing with Cornwood's wife 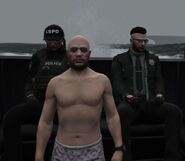 Pat in his underwear on a PD boat after being rescued from the air carrier. Pat was dropped off on the air carrier by his FTO during the "Rainbow Road" bank heist in hopes to catch the criminals before taking off but instead, he was left stranded and afraid. Cornwood and bench guy went out to rescue him and ended up beaching the jet ski on the carrier, needing further rescue. A PD boat ended up rescuing them after pat had stripped down in attempt to "keep warm" 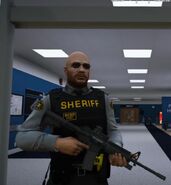 Pat with an AR