Oswald Tinkerman was a character role-played by Zaitohro.

Oswald Tinkerman was a top recording artist in the city for Wu Chang Records. He was also a Prospect of the Lost MC.

Oswald's debut song, "Memories", topped the charts in the first couple of days after public release. He is the first artist in Los Santos to hold the #1, #2, #3, and #4 spots on the LSBN music charts simultaneously. Oswald also held the #1 spot on the charts, with "Low", longer than anyone else in Los Santos.

Oswald became a hangaround with the Lost MC on August 22nd, 2021. Sponsored by Reed Dankleaf, he was eventually prospected into the club on September 1st, 2021.

On October 9th, 2021 after venting to Bobby Schmiguel about his problems in Los Santos and with Wu Chang; Oswald swallowed a Cyanide Pill. Bobby attempted to stop him from swallowing the pill but by the time he reached him, it was already too late. Oswald was non-responsive on scene and was later pronounced dead at the hospital after complications occurred in the surgery room. Upon his death, a resignation letter from Wu Chang Records slipped out of his pocket and was passed on to Mr. Kebun.

A memorial was set up for him at Dean World, where all his friends could write notes for him and his legacy could be spread.

As Featured Artist and Remixes 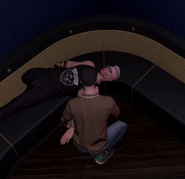