Orianna Frost/2.0 and Prior

< Orianna Frost
View source
watch 02:52
Roblox: DeepWoken - The Loop
Do you like this video?
Play Sound

Olive Once is a character role-played by FalloftheSeason. She has since changed her name to Orianna Frost.

Olive Once is a Paramedic for the Emergency Medical Services, call-sign Papa-33. She was an ex SSB affiliate through engagement, She has been engaged twice & Married once until they died. She was highly allergic to bullets and has been cured through a combined effort of Brexit, Frost, and the Military. She has a split personality called Orianna who is a Quiet Art Lover who draws her grief into pictures and a third one called Orya who was revealed to be the controller of the whole system. 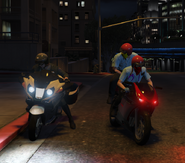