Oki Doki is a character role-played by DisbeArex.

Oki appears to be a cheerful young Japanese woman who currently works at Burger Shot as the Team Leader. She dons a mauve purple hair with her black glasses and usually wears her work outfit, having a blue polo shirt top with the Burger Shot logo at the back, white gloves, white short, and a pair of black socks and white sneakers. She is very kind-hearted and cheerful to her friends and peers. She is also very willing to help them in times of need, no matter how dangerous or risky it is. She also has a habit of calling her friends as "baby", which causes some people to assume that she has interests in them (like Bo Xbox and Jean Paul).

However, despite her having prevalent goodness and niceness, she is also a calculating psychopath and is secretly obsessed with Ken-Sama, one of Burger Shot's employees. She also stated about her past attitude, which is being a "yandere", and how she hated it. She tries her best to not let her "other side of herself" reveal to her peers. Yet, she started to exhibit her previous yandere characteristics due to recent events happening around Burger Shot and in the recent events, it became prevalent when she began to be involved with Sasuke Johnson and his claims of Oki being obsessed with him. She has been recently doing criminal activities such as oxy runs and she does these usually with Majima and Olivia.

Her first obsession was Mike Lemonade.

Only Jeffrey and Frederick know of her past before Burger Shot.

Oki Doki is a Japanese-American with purple hair and was once featured on Steve Smith's IRL Mitch TV stream.

Since joining Burger Shot she has chosen Ken-Sama as her obsession.

Oki later confessed to Bike Guy about her violent past, and to her surprise, he isn't troubled at all.(TBA)

Oki was later kidnapped by Rob (her former night-time manager) for revenge against her and Burger Shot, her right hand was submerged in acid. She does not remember much of the ordeal, as she was drugged with absinthe and oxy.

She also won a Gauntlet Classic car from the casino and Cassie then gave her the keys to the car. She later re-painted the car with a blue and white finish.

Oki has a friendship with Jean Paul. Jean Paul calls her "baby" due to Oki's habit of calling her friends 'baby' and she holds his illegal items due to the police trying to raid his apartment. Among these items that Oki is keeping are:

Unfortunately, Oki wasn't able to return his illegal items due to X's sudden departure from the city. Few days after X's departure, he emailed Oki Doki an important message while claiming he's on a boat to "live in a life of sea". The message says:

"Yo, probably going to be on boat forever. Life at sea maybe I don't know, bruh. That money I gave you, keep it, you've earned it, not by robbing banks but simply by being trustworthy and kind to those around you. It's not like it was ever going to help me pay off that new car of mine anyways. No one is going to come looking for that money, it's safe with you now. Good luck out there."

This signifies that not only he finally pays Oki his $12 000 debt, but also he lets Oki to keep the bags and other items that she was holding. She gave some of the bags to one of X's closest friends, Irwin Dundee. 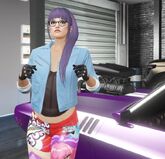