Odessa Pearson is a character role-played by JPKMoto

Odessa Pearson is the Supreme County Clerk working for the Department of Justice.

As the ADA, Odessa was a lead prosecutor during the criminal trial of Officer Jordan Steele. She argued that Steele was intoxicated and hit his wife with a motor vehicle. Ultimately, Steele was found guilty of all charges including reckless endangerment and felony hit-and-run by Judge Buck Stanton.

Odessa led an investigation into the relationship of EMS Nettie Machete and Officer Jordan Steele. She thinks that both lied about their relationship during The People V. Steele case. She officially brought charges against Nettie for perjury and obstruction. The trial date is currently pending.

The Murder of Chris McGrawl

Attorney Chris McGrawl was murdered in a holding cell at MRPD. Odessa arrived to assist Officer Jordan Steele and Cadet Brian Knight with filing charges against suspects Sean Tinker and Sonya Summers. were arrested after a search which uncovered a gun and drugs. Tinker was released, but Sonya had motive and faced murder charges. She was taken to a bail hearing at the courthouse and Odessa recommended that Sonya get held in jail until trial. Judge Buck Stanton questioned the claims of the ADA and wanted evidence (though not required during bail hearings). After a brief deliberation he granted Sonya Summers $50K bail until trial.

Odessa returned to Los Santos and took up the position of Supreme County Clerk where she excelled until being noticed by Abdul AlRahim and tapped for Deputy Mayor. She is currently thriving in the post, along with fellow Deputies Salem Yellow, Sherry Paie, and Ursula Leichenberg. 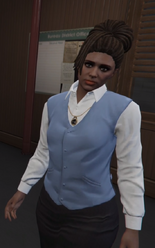