(Novah Looks at as a role model)

Novah Walker is a character role-played by KatFires.

Novah Walker is an associate of Chang Gang.

She was a former member of the East Side Ballas, and a former prospect of the South Side Ballas.

Novah Walker was approached by Big E, after being recommended to him by Middle E. They talked and Novah accepted the offer to become a prospect of the Grove Street Ballas.

Upon hearing that a war broke out between the Grove Street Ballas and the Vagos due to a lack of respect, Novah jumped at the opportunity to defend the cul-de-sac. She became involved in many of the shootings between the two gangs and even got involved in a fistfight with Juan Carlos "Flippy" Hernandez over a bandana when they were released from the prison. Flippy came out on top, though Novah left him one hit away from going down.

After meeting with Randy Bullet from Chang Gang in the streets of Legion Square, Novah was challenged to a 1v1 where she lost, after which Randy gave her his number.

Later, Chang Gang went looking for Novah and found her leaving the prospect house after suiting back up. They kidnapped her on a train track and gave her a few minutes to come to a decision on which side she was on after questioning her, where she stated she was going to switch over to the Fudge Lane Ballas. Chang called Tyrone Biggums, the leader of the Fudge Lane Ballas, who came down to meet her. They got her dressed in his gang's jacket, and started hanging on the cul-de-sac, where Tyrone gave Novah the nickname "Novacane".

The Grove Street Ballas woke up at the houses behind the cul-de-sac and met with Novah there. She expressed that she was trying to bring both sides together. They disliked the idea so in fear for her life she continued to stay with the Fudge Lane Ballas.

Texts between and Novah showed that she still cared about the Grove Street Ballas, who warned her that they were coming down to the cul-de-sac. Novah discreetly told Tyrone that they should have their guns out. AJ told Novah they were turning onto the street and she should go in the house. At the same time Tyclone told her to go inside and put the weed up. When she did this she heard shooting and ran outside trying to move Tyrone out of the way of being robbed. She then started taking shots at Malik Moona who at first refused to shoot her. She missed on purpose and he shot her. The Grove Street Ballas loaded Novah into their car and drove her to Grandma's, with Novah rolling her eyes and yelling at them for touching her.

At Grandma's, a Sherman showed up and told CJ that Novah has a hole in her heart and that he needs to fix it before its too late.

Novah ran from the Grove Street Ballas and texted AJ telling him she was done with them. She was fully committed to the Fudge Lane Ballas. She called them up and they took her out to the airfield and read her text messages. They then took her to the train tracks and left her handcuffed in a car as a train ran over the car, leaving her in ICU.

Novah woke up from ICU not remembering what happened. She called Mark Jango who picked her up from the hospital with DD. Neither one of them had the answer to her questions until CJ woke up and explained to her everything that he knew. He also expressed his current distrust towards her. AJ explained everything else to Novah later in the prison.

Novah had an internal conflict with herself after listening to the decisions that K and CJ made about their future. She talked to many people while trying to figure out what she would do. She drove up to the train tracks where Tyrone ran her over with a train to think things through. While she was there she decided that she was going to talk to Tyrone to join him and leave the Grove Street Ballas for good.

Novah called up Tyrone to have a conversation with him. She straight up told him how she felt, that she could not stand behind K and CJ anymore, and expressed wanting to fall under Tyrone. They drove around for a few minutes before running into K and the rest of the Grove Street Ballas. They wanted to talk to Novah, taking her to the canals, telling her their distrust and her need to make a decision. Pnut took her bandanna off of her face and pulled his gun out. At that moment Novah announced her decision to leave them. Pnut shot her and left her in the water. She later joined Tyrone.

During the war with the entire city, Novah became incredibly uncomfortable with Tyrone's actions of going to war with the group that got her to join the Eastside Ballas to begin with. Novah also being connected to Vinny, and seeing him as a big brother to her, followed his word once Vinny asked her to stay out of the war and she took that to heart. Therefore, she continued to run bands in secret for Chang Gang, supplying them oxy and money knowing the consequences of her choices could lead to her life being taken. While the Fudge Lane Ballas had their suspicions, they never found evidence until the very end. Mr. Kebun felt really bad, as he connected Novah to the Eastside Ballas to begin with. On December 8, 2020, after one of the battles at the cul-de-sac, Novah was told to follow Vinny Pistone, Mr. Kebun, Randy Bullet, Ramee El-Rahman, Charles "Taco" Prince, and Dequarius "Big D" Johnson where they asked her to join as an associate of the Chang Gang.

Novah was in a short term relationship with Mac Jones. Broke up over text.

Novah and Clarence started off as a secret relationship, but when Tyrone suggested it to Clarence to help benefit the crew, it became public knowledge. On December 8th / 9th 2020, Clarence found out Novah left Eastside Ballas, and joined CGA. He was displeased with these actions which resulted in him breaking up with her over text. 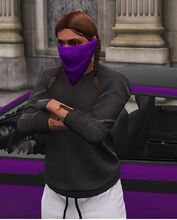 ESB Look
Add a photo to this gallery

Retrieved from "https://nopixel.fandom.com/wiki/Novah_Walker?oldid=104308"
Community content is available under CC-BY-SA unless otherwise noted.