Noah Drake is a character role-played by WTFGameNation.

Noah Drake is a Surgical Resident and Psychiatrist at Pillbox Medical Center. He is extremely self-confident, often referring to himself as "Noah 'Fucking' Drake".

Always to the point, brutally honest and a doctor that expects the best care for his patients from himself and his colleagues.

Drake grew up as a trustfund baby. His parents gave him plenty of financial support, but not a lot of emotional support. Nothing materialistic was lacking in his life - luxury cars, nice clothes, expensive restaurants, high-class women - you name it! However, too many fake friends hanging around him for his wealth, has made Drake weary of new acquaintances and left him with deep-seeded trust issues.

Drake had a 'laissez-faire' attitude to his education and managed to graduate, even though most of his time in school was spent partying, dabbling in drugs, chasing girls and chasing waves.

However, even though he lived the life of luxury, something was still missing in his life. After graduating Drake traveled far and wide chasing waves and getting pitted on his surfboard - Fiji, Hawai'i, Tahiti, Portugal, South Africa, Morocco and Australia. No break went unsurfed and no beach babe went unbanged.

The care-free lifestyle didn't last forever though. Drake received a phone call with news of a tragedy. His brother had passed away due to mysterious circumstances.

After hearing of his brother's death, Drake returned home. He was always the family's black sheep and the loss of the "better" brother, only strained the relationship between him and his father more.

After returning home Drake returned to his old lifestyle of self-destructive behavior and was charged with drug possession and reckless driving.

This was the final straw for his parents. Drake's father presented him with an ultimatum - either you get a job or you get cut off.

As a metaphorical middle finger to his father, Drake decided to go to Medical School, since this was the longest thing he could do, without having to get a job. Drake thought he played his old man, but essentially played himself.

In Medical School, he realized his great talents in human anatomy, psychology, pharmacology and patient care. It was there he found a liking of helping people in need, that he didn't know existed within himself.

Now, he lives and breathes for the hospital and his patients. His life is all about giving people the best treatment that he can manage and he has never lost a patient on the operating table. Although, there have been many close calls.

Drake is all about helping others, accountability and supporting those in need, despite his troubled and gritty past. 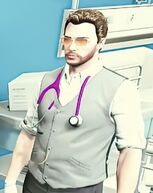