Mr. Robert Rodgers, better known as "Mr. Rodgers" is a happy go lucky civilian who can come across as creepy at times. Nothing ever seems to bring him down and finds the bright side even in the worst situations. He loves making sandwiches with extra mayonnaise for his friends. He also has an addiction to energy drinks & coffee because he needs energy power walking and riding his bike through the city. Some avoid him due to his creepiness and how strange he is. Many think he could be responsible for countless attacks on venerable citizens across the city of Los Santos. Not much is known about his life which makes him mysterious.

(He references religious stories to some citizens, who shortly learn of his dark nature when spending enough time with him.)

(Suspected of forming a cult called "The Neighborhood" that is believed to be committing human sacrifices.)

Mr. Robert Rodgers faced the death penalty for multiple counts of attempted murder and murder. The DA's office pushed for the death penalty. A panel of justices including Dennis LaBarre, Judge Holden and Coyote found Rogers guilty of six counts of attempted murder and one count of murder. Rodgers would not admit guilt and wanted a chance to appeal the charges. The verdict was given without the option of appeal, he received 18 years in prison including the 11 years already served. Rodgers would be eligible for parole in 7 years. 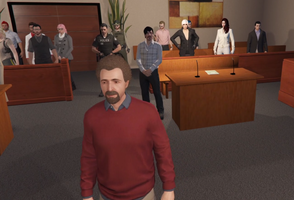 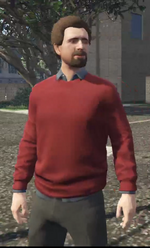