Misty's first day in the city was more eventful than most people's - she woke up with zero memory of how she got into Los Santos or anything about her past. All she had was a cellphone and knew that she loved the beach - she spent a while fiddling around with the cell phone at the beach until she discovered Twatter, which she instantly fell in love with, using it to communicate with residents of the city and quickly became (in)famous for being a larger than life personality on the app. Very lazy, never doing any work, relying solely on Twatter to make a name for herself while collecting government checks from the state - Misty didn't take long to fit right in with the city.

She quickly made a lot of enemies through Twatter, including but not limited to Carmella Corset, Hannah Hiltop, Paris Argo and Lana Valentine - who all formulated a plan to denounce Misty and humiliate her. They repeatedly ganged up on her until Misty took a bullet from Tay Taay at the 24/7 store delivery depot for Hannah, which turned the enemies into friends, turning around their relationship for the better - but the damage had already been done to Misty's reputation with the name "Musty" that the gang had created to make a fool of her, that name being one of Misty's alternative personalities.

Another major event that happened to Misty on one of her first days in the city, scarred her for life - a simple trip to Burger Shot for some food turned into being hit on by some guys, which then turned into getting attention from some of the employees there - unfortunately for Misty, one of the witnesses to this happening was Molly Minaj, who took exception to another woman getting attention around her. Because of this, Molly incapacitated Misty with a crowbar until she was unconscious, drove her to the beach, burned and shot her before driving her into the ocean in the back of the car.

Due to the series of events with Molly, Hannah and the gang, Misty developed Post-Traumatic Stress Disorder and Dissociative Identity Disorder, she looked for help from Pillbox for these disorders however her therapist stopped responding to the texts and Misty gave up with it, just accepting what she has. Her DID got much worse over time, her personality constantly changed and flip flopped repeatedly until they all merged into one consistent personality - making her who she is today. No longer was she simply a Twatter superstar, she became notorious for her crimes, soon becoming a hardened criminal with a deep desire to murder police officers.

Misty Mocha had a monotone voice which has often made people say she has a "resting bitch voice", she harbors resentment towards police officers and isn't afraid to make people aware of it. She says "banana" each time she has the need to try to kill a police officer - this came from a plan she made with Mia Joy to shoot at Kyle Pred so Mia could take a bullet for him and make him fall in love with her, which failed miserably, as "banana" was the code word. Since this plan, she uses the term "banana" with every cop she wants to kill. Despite the personality being rough on the surface, she has a bigger heart than she tries to let on, she cares deeply for her friends and isn't quick to hate people unless they give her a good reason to. She's the kind of person who would put her friends needs before her own, feeling that she has nothing to lose. She had a passion for motorcycles and had a dream to be apart of an MC someday. She rode her Hexer almost everywhere she went and treated it like her own child.

Misty worked for Smoke on the Water, Juice Up Gymnasiums and a side-gig as a Nightcrawler (Weazel News).

Smoke on the Water was Misty's favorite place to sink her time into. She was offered a position by Windsong as a cashier after proving her worth selling fruit for Putos Frutos. She quickly rose up the ranks to Manager by putting in more time and effort than almost any other employee. On multiple occasions Misty was targeted by kidnappers and assassins working for an unknown enemy of SOTW that was often rumored to be Lang Buddha, the owner of Roosters Ranch. Misty quickly became infamous for her combat abilities by defending herself, her friends and SOTW's marijuana farm.

Although Misty worked as a Personal Trainer for Garry Roche, she never actually got the chance to perform her duties at the gym. Most of her time was taken up with Smoke on the Water and was hired by Garry during an unusual time with everyone transitioning to Dean World and the Farmer's Market.

With what ever free time Misty was able to get, she would moonlight as a Nightcrawler gathering footage of people and events in the city to sell to interested parties or the to highest bidder but, never the police.

The police and Misty's distaste for them is far from random, it's a distain that's built up from a series of events and continues to get worse with every encounter she has. She also has a paranoia of the police potentially working against her at every turn which was made abundantly clear when her encounters with Wrangler and other police multiplied after joining Smoke on the Water.

Misty developed a relationship with Lenny Hawk in an attempt to use his LEO privilege's for her own gain. Lenny ultimately ended up proposing to Misty during this traffic stop. 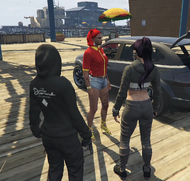 Misty and Mia confronting Molly Minaj at the Pier

Misty with her gang 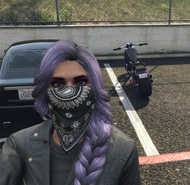 Misty and Phoenix in Stab City

Misty and Windsong at Smoke on the Water

Misty and I had so much fun this day, I miss you

Misty Mocha with the Condemned MC and friends, group photo after our first bike rally. You will be missed! 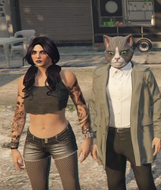 Kitty crushing on Misty. I miss you <3 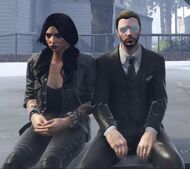 Misty and Thomas on their date - already miss you so much! 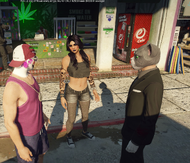 Bozo, Misty and Zoog hanging out in front of Smoke on the Water

Misty together with Mia (by Mia_Joy) 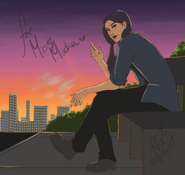 Misty and Mia (by Mia_Joy) 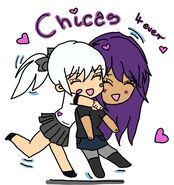 Thank you for being my virtual crush. Sort them out "up there" Misty. (by Lilpwnd)

Misty and SotW (By Snailteef)
Community content is available under CC-BY-SA unless otherwise noted.
Advertisement