Misa Price is a character role-played by Marsziipan.

Misa Price is a Deputy for the Paleto Bay Sheriff's Office, Badge #321.

She was formerly a Dispatcher for the Los Santos Police Dispatch, and a Lieutenant for the Emergency Medical Services.

Misa is shy, but friendly and personable. She doesn't like to be the center of attention, preferring to converse with people in large groups as opposed to one on one. When it comes to work, she gives it her all and hates to make mistakes or let down her superiors. She take criticism to heart and uses it to better herself. Misa goes by the saying "Treat others the way you want to be treated." No matter who she meets, Misa makes sure to be kind to others, giving them small compliments and a friendly smile. She does tend to keep emotions to herself, refusing to show anything but her happy personality to anyone but those close to her. She believes her issues are her own and are not more important than anyone else's.

Growing up, Misa was always poked fun of for several reasons. Her and her sister, Mina, being identical twins and her ethnicity. She lived in a semi-strict household, mother always expecting perfection and father being more aloof. Hating to cause any problems or to disappoint her parents, Misa always made sure to do what was asked of her without complaint. Like every family, they had their ups and downs, but she could comfortably say she had a good childhood.

Wanting to follow the footsteps of her mother, a nurse, Misa began studying various forms of medical care. At the core of it all, she enjoyed helping people, taking care of them, and making others happy. However, she didn't have the desire to become a doctor or even a nurse. Despite what it may seem like, Misa likes chaos in her life, which lead her to the decision to pursue a career as an EMT. When Mina moved to Los Santos to pursue a career in law enforcement, Misa wasn't too far behind.

Starting out at the bottom as a trainee, Misa slowly moved her way up the ranks to become a Lieutenant for the Los Santos Emergency Medical Services. During this time, she also became a veterinary technician for the new K-9 fraction of the Police Department. However, after some period of thought, Misa decided to leave EMS and transfer over to Dispatch, her last day for the department being October 31st, 2021.

Misa began working for Dispatch on November 1st, 2021 and was one of the fastest to become a solo dispatcher, achieving the status in roughly 3 days. She would often cover all of shift 1 and most of shift 2. She thought she would stay with dispatch for a longer period of time, but after a surprise ride along on Christmas day, Misa came to the decision to apply for PD.

On December 30th, 2021, Misa attended a training day/bootcamp for Paleto Bay Sheriff's Office (PBSO) and, on January 2nd, 2022, she was officially hired as a cadet, taking the callsign #567. 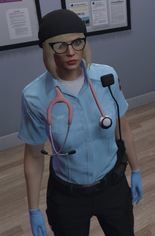