The Mirror Park Tavern was a bar and former moonshine distillery located in Mirror Park. It served as the primary hangout and meeting spot for the HoA. It is currently closed and under local ownership.

The Tavern was purchased by Siz Fulker as the new hangout spot for the HoA in Mirror Park, with initial construction of the building's new interior being completed on April 10th, 2020.

Siz had another renovation done to the interior shortly afterwards, of which added a cage for two chimpanzees, Chimp Caesar & Mighty Joe, among other minor aesthetic changes. Further renovations that coincided with the state's 3.0 phone update a year later added: the distillery and other equipment required to actually create and serve alcohol independently as a business and installed locks in the tavern so members of the HoA could finally close off the tavern/distillery at will.

As a business it began operation in November 2021 and lasted until 1/11/22, selling drinks and other products to the various citizens of the state. Their main illicit business was a moonshine distilling operation, which operated until the Tavern's demolition. By 5/4/22 it was rebuilt (with the same blueprints the property had before Siz took possession) and resold it back into local ownership, no longer being open for business.

For a significant period of time after construction was completed the Tavern wasn't actually able to begin operating (as the equipment required to produce drinks of any kind was missing). Its first employee ended up being Dante Thomas, who took it upon himself to begin selling bottled alcohol at the location in November 2020.

Once the required equipment did arrive with the 3.0 phone update, the Tavern was quickly staffed by the rest of the HoA, who began purchasing fruit, alcohol, and the various other ingredients needed to make drinks. Furthermore, moonshine began being distilled in the back room of the Tavern, only accessible to the HoA. However, after a few weeks most of the members outside of HoA's high-command waned in their commitment to supporting the Tavern for a variety of reasons (with the most common reason being a lack of interest in actually running a business). This forced Siz to start hiring outside workers to replace them in a bid to maintain the business (with them becoming the Tavern's new primary employees). In spite of their effective replacement in the day-to-day operation of the tavern, the rest of the HoA were still "employed" by the Tavern so that they could maintain access to the building's stash in the distillery room.

When Siz first decided to begin hiring new workers, he placed the last remaining regular employees of the Tavern (Dante, Kray Tor, and Jesus) in charge of the hiring and vetting process.

They sold various drinks out of the bar, including absinthe under the discreet name of Top-Shelf, moonshine under the name Full-Moon or Holy Water, the non-poisonous variant of their specialty cocktail Red Death, and since 4/16/21 shoeys from the footwear of various citizens in San Andreas. Their brand of absinthe was 95% alcohol and they stated that it literally "knocks you on your ass". The secret ingredient was Erin Cox's bathwater. The Tavern was never able to make food as their microwave was broken for its entire lifetime. Prior to the stalls at the Farmer's Market and Dean World opening, employees ran to the Mirror Park Gas Station to purchase sandwiches and resold them at a marked-up price. With the addition of Dean World and the Andi Jones Farmers Market, the Tavern expanded their operations to these two areas (starting with the Farmers Market on 4/28/21). They used these locales to sell food that they were unable to make at the Tavern, focusing primarily on finger food such as mozzarella sticks with marinara, poutine, buffalo wings, and plenty more. Additionally, the moonshine they distilled was consumable. It was much more potent than the absinthe that they made, though it was kept under wraps as moonshine was a highly illegal substance (although not until nearly a month after the tavern opened). They selectively sold moonshine to certain individuals, but knowledge of its existence became wide-spread as employees of the Tavern sold it to untrustworthy individuals, most notably Carlos Sanchez's decision to sell moonshine to the Tavern's direct competitor, the owner of Rooster's Rest. Kray Tor began secretly selling moonshine to the various people of San Andreas in exchange for bands of cash, tasking a few bartenders to help him in this operation.

The Tavern was hired by Dean Watson and Otto Delmar to cater at the Diamond Resort and Casino. Though, their relationship dissolved shortly after the opening over a payment dispute and strongarm attempts conducted by the Casino. Although Dean and Siz managed to mend their relationship (albeit it was still rocky).

Various types of events were also held at the Tavern to increase business. Though the place may have been small, events were usually held outside by the Tavern parking lot or around Mirror Park. Additionally, the Pillbox Medical Center began prescribing the Tavern's Top-Shelf as medication under approval of Noah Drake, with the Tavern suppling them with Top-Shelf when needed. Aside from serving alcohol, around this time the Tavern hired Nicholas Reyes and Nicole Rivers as librarians to sell books out of the Tavern in preparation for the Liquid Library.

As a result of the lackluster success of the business, combined with general boredom of his situation at the time, Siz began brainstorming ideas for the Tavern's replacement shortly after it became fully operational. He concluded that his next business would be called the Liquid Library, which (as the name implies) is a place where people would rent out books (or purchase them) to read while drinking alcoholic beverages on the side. Kermy Fulker came up with this idea after he was brainstorming possible new ventures for the Tavern to expand to (as they were facing stiff competition from the Rooster's Rest and other establishments and wanted to attract more customers). After quickly realizing this would be more feasible as an entirely new business, Siz acquired the plot of land across the street from the Tavern and planned to renovate it into a functioning library, bar, and biergarten. Furthermore, (after seeing the HoA's attitude towards the tavern) Siz initially decided to make the Liquid Library, from the get go, focus on hiring civilians to run the business rather than rely on the HoA; to this end he hired librarians to have ready to occupy the LL when it was finished. Although by November the focus had shifted back to the HoA as by that point they had regained the confidence of Siz.

While the idea was presented to a construction company in the first months of 3.0, construction on the LL didn't begin until early January of 2022. The preceding months consisted of: postponements, stalled planning, and construction being juggled between several contractors. The LL would eventually begin operating in a limited capacity after 4/19/22 and celebrated its grand opening on 6/13/22.

On March 24th, 2021, the Tavern received the ability to use manufacture poisoned sandwiches, water, and a specific cocktail called "Red Death" by utilizing the byproducts of the distilling process for moonshine. It was improved upon the following day as the Tavern became able to fine tune the potency of the poison and its duration. On 3/25/21, Siz also discovered that by reversing the process he could manufacture the same items as "potions" that instead regenerated health (although the ability to do this was removed by the government the next day). On 5/17/21 the Tavern received the ability to poison any item, vastly increasing their service's marketability as they were no longer limited to specific food items, which were one time consumables.

Siz and the rest of the HoA had plans on making it a full-time service by selling it to criminals, psychopaths, and serial killers. With the help of John Miller and Lexi Law, for a time they were able to get customers to purchase or have an interest in the product. However, after a few weeks it became evident that there was very little demand for poisoned items. Demand was so low that after August there were no further orders for any poisoned items, in fact afterwards this aspect of the tavern was only ever used to experiment internally with drugs (which were never sold in affiliation with the Tavern).

As the Curtain Falls

On January 11th, 2022 the Tavern met an untimely fate as it was blown up by Siz Fulker with a bundle of C4. It was chosen as the site for a ruse where the HoA and the Unified Police Department met under the pretense to hash out problems that occurred after a meth run resulted in a raid warrant that was drafted and pushed by Daisy Dukakis and Matthew Espinoz. The HoA demanded for Espinoz to give up his Mirror Park house as compensation, though Espinoz did not agree. His counteroffer was to give the HoA Shrugway Gift Cards as a monetary middle ground. The HoA did not agree to that, instead they convinced Espinoz to work at the Tavern for a week as a ploy to get him inside the building without suspicion. When Espinoz began his "training" at the Tavern shortly afterwards, the HoA sprang their trap. Siz and company: captured Espinoz, planted C4 at his feet with a timer for five minutes, locked the door, and then watched from a distance as it detonated. The resulting explosion completely demolished the tavern, ending its nearly two year existence.

Throughout its lifetime under Siz's ownership the business served mostly as a hub for the HoA and Mirror Park as a whole. It was often used as a: source of personal income for the rest of the HoA, a communal storage area for the gang, and (once it began to make a profit) as a communal bank to fund the gang's more casual criminal escapades. As a result, Siz himself rarely actually took a share of the income from the business (even during the hardships experienced early on in 3.0).

The Mirror Park Tavern has been the site of multiple deaths, some of which were murders. Members of the HoA believe the people who died in the Tavern are haunting it and have cursed the place. 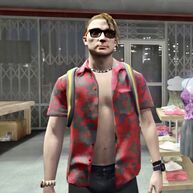 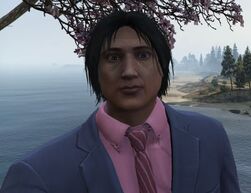 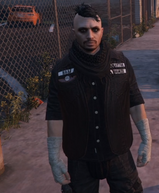 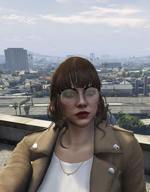 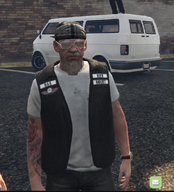 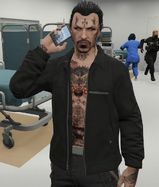 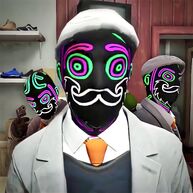 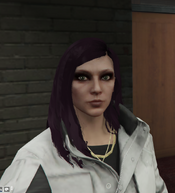 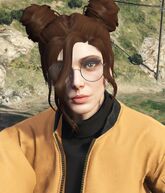 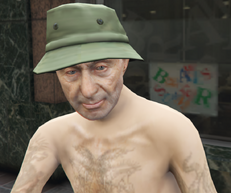 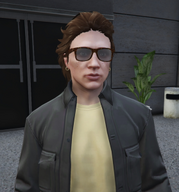 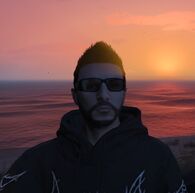 Fred, Manny, Zelda, Stanley, Blaine, Kleb, DRL, Huck, Julio, Siz and Kray-Tor during a complaint jar opening at the tavern in 2020, prior to the 3.0 phone update

(L-R) Huck, Kray-Tor, Siz, Julio and Holden (their Old Lady at the time) in front of the Mirror Park Tavern shortly after it was constructed. Photo taken by Griselda Harth in 2020, prior to the 3.0 phone update 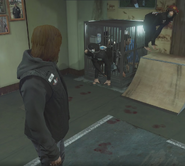 Siz observing the tavern "monkeys" Chimp Caesar and Mighty Joe poop and fart on several poor victims trapped inside their cage in 2020, prior to the 3.0 phone update

Francois & Bianca chilling at the tavern 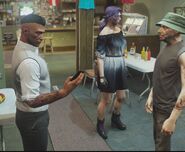 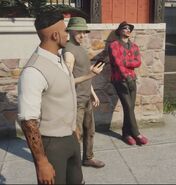 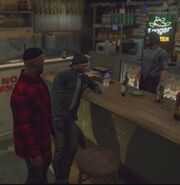 Kian & Matthew talking with a customer 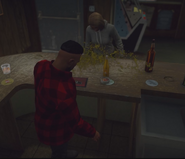 Kian getting thrown up on by a customer 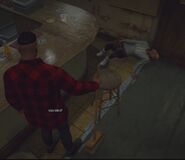 Kian cleaning up after a customer 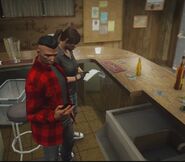 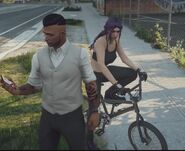 Kian and Mia outside tavern 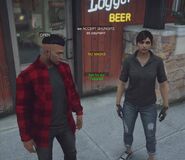 Pinzon throwing up in the tavern 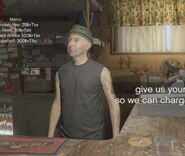 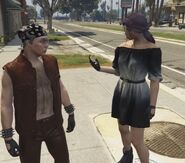 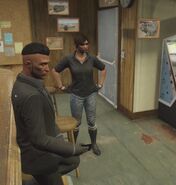 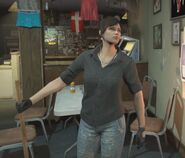 The still burning rubble of the Tavern later on 1/11/22
Community content is available under CC-BY-SA unless otherwise noted.
Advertisement