Minerva Maat is a character role-played by MinervaMaat.

Minerva Maat is a Senior Deputy for the Paleto Bay Sheriff's Office, Badge #358.

She was a Corrections Officer for the Department of Corrections, Badge #707.

Back in her homeland Minerva joined the police academy, following her father’s footsteps. She completed academy and became a cadet for the GNR (or NRG - National Republican Guard - gendarmerie force of Portugal) but after only 1 year everything changed. The loss of her FTO, Sergeant Miguel, during a shootout between the police and a gang led her to develop PTSD and she decided to leave her career, family and country behind and move to the US.

In the US, Minerva started as a lumberjack before going back to being a police officer. She was a State Sergeant in the last city she was in, her call sign was 350 and she was a part of their marine unit. During that time she found love and got married but also suffered the loss of her best friend Katey to another episode of gang violence. In December of 2019 she resigned from her job and moved to Los Santos due to her divorce. She took a break of almost 3 months and then decided to pursue being a police officer again and applied to join the Department of Corrections. She has past connections with Henri King because they used to work together before moving to this city and she later found him working for DOC after she applied. He was also the one to train her for DOC.

On the outside she seems like a very happy person, always trying to tell a joke and make others smile with her sarcastic remarks. But on the inside she’s someone very damaged by PTSD and the feeling of guilt regarding her mentor’s death. She can be very cold and distant when she’s going through tough times and resorts to not showing her true emotions, especially around those she works with because she’s very professional. She loves to ignore and run away from her personal problems by either keeping herself busy with work or by drinking (she developed a drinking addiction after her divorce). If you have her trust (which is very difficult to gain), she is probably one of most loyal people you'll ever meet and is very protective of those she truly cares about. Overall she loves helping others, respects authority and looks up to her superiors, especially FTOs that take time to teach others the best procedures. One thing she hates is being asked about the past and will keep to herself most of the time. 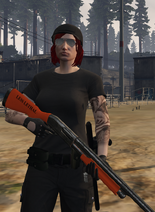