Follower of the Sloth God

being abandoned by someone she's attached to

Mina Rocket is a character role-played by minakorocket.

Mina Rocket is a young lady who always seems to be happy and laughing. While her initial arrival to Los Santos was filled with some misfortune, she has managed to befriend many people around the city. Her positive outlook and generosity often leads to her being scammed, often by the very strangers she tries to help.

Although she doesn't value money for herself, Mina is a hard worker and is more than willing to use it to help her friends out. She tries to be kind to every person she meets, finding unique people to draw portraits of. She refers to herself primarily as an artist and is secretly a psychic, admitting to communicating with ghosts and also dabbling in tarot reading.

She is bisexual and finds confident strong women the most appealing.

After escaping the Yakuza, she needs a new identity. Of the books she picks up, Dracula is one of the them, and from it she decides on the name Mina, taken from the character Mina Harker.

During a talk with Marcus Grail, she reveals for the first time that her birthname is Himiko.

While Mina notes she wasn't the most beautiful girl to work in the hostess club, people often describe her as a "very pretty girl". Her red hair is one of her most recognizable characteristics, however she is not a natural redhead. She also wears colored contacts which conceal her real eye color.

Her style tends to change based on where and who she is interacting with. 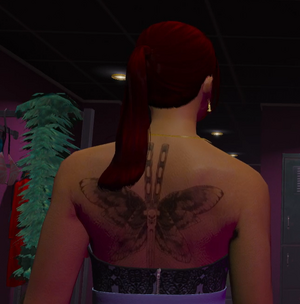 Mina is often described as bubbly and nice, characteristics that allow her to befriend many of the people she interacts with on a daily basis. The happy exterior is a front that not many people can see through, at least not at first, which hides a deep sadness and loneliness that developed over the course of her life.

Unlike some people, Mina is not driven by the desire to accumulate wealth for herself, instead, wishing to be a helpful person to the people she cares about. As a child, Mina never owned anything that she could call hers, so the gifts and items others might deem as replaceable are the things she values the most, viewing them as memories.

Mina hesitates to speak up for what she wants, as she has not had the desire for things before, and does not want to be a distraction or imposition to others. Her ex-boyfriend comments that she is easy to be used by people who hold bad intentions as she freely loans out her hard-earned money when asked, something he often encourages her not to do. This kindness results in some unfortunate events, including being robbed or kidnapped when she tries to help strangers.

Mina maintains interesting relationships with many members of various gangs in Los Santos. She has been recruited twice: Bobby for Brouge Street Kingz and Mike Block for Alta Street Ruff Rydaz.