Mina Price is a character role-played by Kari.

Mina Price is a Corporal for the San Andreas State Park Rangers, Badge #240.

Mina is very outgoing, social and ambitious. She is the hardest worker out there and works relentlessly towards her dreams, no matter how painful and disappointing the process. As a result, she tends to excel. Although she has faced many challenges and changes in her life, she remains cheerful thanks to her strong character, willpower and support. When at home, she tends to be a little more reserved and just likes to relax. Although she is usually bright and happy, she can also be quite pessimistic, self-critical, and blunt, this bluntness and quick wit often making for a good laugh. When she’s not in the best of moods, she will either become more reserved; or put on a smile in an attempt to not worry anyone.

Growing up, Mina stood out for many things, the main one being her appearance. Being half Japanese and half Canadian was the least of her problems though. Her mother was always strict on her. One mistake, no matter how big or small, and she would be disciplined. Her father on the other hand, was much more relaxed. This was always odd to her because he was a cop, while her mother was a nurse. Shouldn't it have been the other way around? Despite the challenges she faced with the strictness of her mother, her upbringing was otherwise a relatively normal one.

When the question "What do you want to do with your life?" came up, Mina was torn. Her mother wanted her to become a doctor, but her heart wasn't in it. Unable to speak up, she stifled her feelings and went to medical school, working as a nurse in the meantime to support herself. Mina was prepared to spend the rest of her life as a doctor, even if it didn't make her happy, but things abruptly took a turn when her best friend mysteriously disappeared.

Her father was assigned to the case but there were never any leads. He worked it day and night despite this, and Mina helped in any way that she could. After several months of nothing, the case went cold. Completely distraught, Mina took time off school and work to clear her head. It was during this time that the feelings she always stifled down came out tenfold. Taking the advice her father always gave her, she decided to live by her own choices and not those of others. She quit her job, dropped out of medical school, then actively began pursuing a career in Law Enforcement in Los Santos. 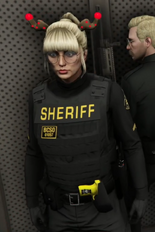 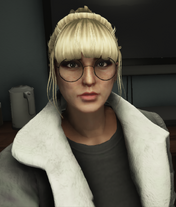