Mike Smoore, previously known as "Prince of the Vagos" is the adopted son of the El Jefe of the Vagos, Speedy. Before being adopted by Speedy, Mike has said to have been raised in an emotionally abusive home that left him mentally cautious of authoritative male figures.

Mike is very loyal to the people working with him and he has managed to build close relationships with many criminals around Los Santos.

Speedy told Mike to change his last name from Smoore to Santana. Mike has decided to hyphenate his name to Smoore-Santana. Mike is now waiting on the government to make it permanent.

Departure from the Vagos

Mike Smoore was a Veterano of the Vagos.

On November 5th 2021, Mike and Chino Gonzalez got into an argument about the future of the Vagos. Chino made it clear that if a leader of a gang were to take the gang down the wrong path, that someone should step in and make a necessary change to the leadership, implying that his desire was to overthrow Arush Patel Santana. Mike, in staunch disagreement and with absolute loyalty to his father Speedy, insisted Chino immediately let him out of the car. When Chino pulled over, Mike’s rage overcame him, he pulled out his AK and shot into the car that was full of Vagos members, including Frank Junior Smith and Javier Diaz, as Chino drove away.

These events followed the departure of Benji Ramos, and subsequent mass exodus of Vagos members showing loyalty to Benji over the course of the previous week. These members include, Karl Johnny Black, Reggie Might, Chico Guzman, Pepe Ramos, and Joaquin Jimenes. Ultimately, Javi decided to leave the Vagos as well, citing Mike’s shooting at fellow members as one of the many reasons that he no longer wanted to be a part of the gang.

As a result of the situation, on November 8th, 2021, Speedy and Jose Luis Santana (Cousin) took Mike for a meeting in “Tijuana” (out to sea). Speedy explained that Mike betrayed his order to not react to Chino and to let the'shnakes' make the first move in the coup. Adding, that he could not let even his own son dictate the way la familia should be. Speedy handcuffed Mike and slipped a note in his pocket, telling him he would no longer be a part of the Vagos but would still be his son, his partner and friend. Speedy told Cousin, “You know what to do, Cousin. I can’t watch.” Speedy turned his back while Cousin shot Mike. Speedy's words were, “Let him drift into the wind, like the true legend he is.” Cousin dropped Mike's body into the ocean and the two drove away in the boat.

Life After the Vagos

After waking from the ICU, Mike learned that out of all of his emergency contacts only Ash Ketchup and Mila Smoak came by to visit him. Later, he discovered the note from his 'Papa' which read;

"My son Michael, you have been nothing but the best for your papa and the Vagos and the La familia, I want you to understand that what had to be doneis done and this is the only way i get to save my own la familia from getting harrased shit on and fucked just cause his papa his the jefe, my son remember blod is stronger then semen and you are my blood and we shall be family just not in the yellow world together, i hope when you awake from the hospitale you see that your papa has to do what he gotta do to protect you the one he love the most. - Speedy" 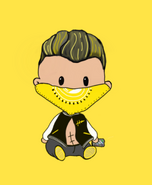 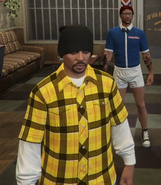