Black
Mighty Joe is an animal played by Tobii. (This character was not streamed.)

Mighty Joe is a chimpanzee purchased by Siz Fulker as apart of renovations for the Mirror Park Tavern. Until it was destroyed his home was said tavern, where he shared a cage with Chimp Caesar (the other chimp purchased for the tavern). He shares many similarities with Chimp Caesar in regards to his abnormal intelligence and ability, but is much younger. The two tended to hang around one another as the two HoA chimps and could usually be seen getting into shenanigans in their escapades outside their cage.

Mighty Joe and Caesar farting and shitting on Daryl, Blaine, and Eggroll in their cage at the HoA Tavern

HoA taking a photo beside their mural 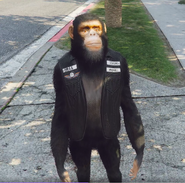