Michael Simone is a character role-played by Tobii.

Michael "Mick" Simone is a member of Seaside with close ties to HOB and the Lost MC. He has sports-short, slick-back white hair and a clean shaven face, his head being occupied by black petrine earrings. He also has a collection of tattoos covering his body, a petrine on his forehead and other tattoos along his arms and back. However, while on the run from the Unified Police he has been known to change his appearance constantly; from shaving his head to dyeing his hair dirty blonde, he tries everything to hide from the PD. These variations of looks are often accompanied with glasses or a hat to cover his facial traits.

When it comes to Michael's personality, he is a known terrorist and isn't shy of using lethal force to push the narratives he believes in. He has been regarded as "unhinged" and often leaves a trail when committing any illegal action, wanting others to know what he has done. He often supplies bombs, guns and heavy artillery to those who "punish" wrongdoers - his motto being to correct the corruption in the city.

In relation to business ties, the Simone family in itself holds extreme riches, Michael's father being exceptionally wealthy- Despite this, Michael prides himself on not using any of his families money. In order to gain his own income, he sells artillery and maintains roles in important companies such as RON Corp.

Michael is the younger brother of Nicholas Simone, the two often getting into petty squabbles and arguments. However, due to their mother's death at a young age and the negligence of their rich father; the brothers are known to look out for each other, and exhibit similar behaviours as a result- especially in regards to violence and destruction. Nonetheless, the Simone's are the only family either of them have and would never betray one another.

During mid 2019, Michael took the decision to leave his brother at their home town in Denmark and move to Los Santos for a fresh start. However, Nicholas eventually came to LS to check up on his younger brother, Michael and ended up staying in the city alongside his brother- the two sharing a home in Rockford Hills.

Mick at the Lost Compound
Feb 2022 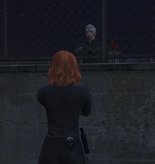 Mick meets with Jenny Hall, while having a warrant
Feb 2022

Mick is caught and detained
April 2022 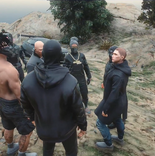 Mick and Nick in Seaside territory
May 2022

Mick, MigL and Vinny at the airport
May 2022

Mick meets with Chang Gang in the VLC tunnels
May 2022

Nick helps Mick to dye his hair
May 2022

Mick with his new hair color and Nick
May 2022

Benji Ramos and Mick at his secret home
May 2022