Mikey on a Bikey

Was "married" to Tracy Martell

Mikey Dias was a Deputy for the Blaine County Sheriff's Office, Badge #323.

After becoming a Deputy, Dias showed an almost disturbing fondness for the BCSO truck. He also insisted that the mullet is the "height of fashion", and under no circumstances would he ever cut it off.

Dias spent many years training against the wild fauna of Australia. Boxing with kangaroos and destroying drop bears.

Dias served in the Australian Special Forces, specifically the Recognizance Division. It is here that he discovered and subsequently honed his tracking skills. During his military service he amassed zero confirmed kills and one injury on himself when he shot himself in the foot and was medically discharged for incompetence.

While still living in Australia, Dias’ brother Jose killed their father via shotgun blast to the head. Subsequently Jose fled Australia to Los Angeles. Dias gave chase which had him move as well. It is while living in LA that Dias met and married a woman named Anna. Dias applied and began working in LA. He became head of the Criminal Investigation Bureau. It was during his job here that a case brought him to find the decapitated head of his wife, Anna. It didn’t take Dias long to find out that it was, again, his brother who brought upon death to his life.

In bloody pursuit of his brother, Dias followed him from LA to Los Santos. He changed jobs, started selling burgers on his bicycle, and eventually became a gardener for the Los Santos Police Department. He then applied to be a cadet in the academy, was accepted, and rose up the ranks to avenge his late wife.

On November 30th, 2019, Dias responded to a call regarding the HOA kidnapping a civilian (Mervin Mulcher) in Mirror Park. After pursuing the car in a chase, the HOA crashed; ejecting Mervin from the trunk. Mervin ran for cover quickly behind Dias' police cruiser. The HOA members jumped out of the car, aiming Class 2 guns at the officers.

Dias found himself in a one-on-one shootout with Denzel Williams. Dias was able to take down Denzel, but suffered from mortal bullet wounds, and quickly losing consciousness from internal bleeding. He attempted to use an emergency IFAK, but ultimately passed out due to blood loss.

Upon arriving at Pillbox Medical Center, he was unresponsive. Dias left a note with the local doctor on duty of his emergency contacts: Ziggy Buggs and Lauren Forcer. Dias' will granted Lauren all of his possessions, other than his new car, which he left to Ziggy.

As Denzel was unmasked with several police officers there to witness to the event, he was able to be clearly identified as Dias' murderer.

The Court Ruling of Denzel Williams

Despite severe lack of evidence from the police (the shotgun had been missing since the day of the murder, no casings retrieved or blood samples recorded in the MDT after being collected on scene), the verdict for the charges against Denzel weighed in the favor of the police force.

Denzel admitted to being "Guilty" in court, taking a plea deal. He has been sentenced to Life in Prison, with possibility of parole after 60 years.

Mikey's murder weapon was symbolic, as stated by CallMeGrub.

Siz Fulker and The Bloodhound

Deputy Michael Dias and Siz had a special relationship ever since they first met. Siz had been the only person who had consistently offered Dias any sort of challenge during his police work. This created a sort of intense rivalry between the two (mainly for the title of "King of the Dirt".) This pursuit rivalry spilled over to many other aspects of their interactions, with the two often exchanging banter whenever they encountered one another on the streets or during an arrest.

Despite the apparent rivalry, Dias did have a soft side for Siz, and often gave him light punishments when captured. He once even went out of his way to stop Siz from being raided; striking a deal with him to return the PD grade weapons he stole off of his person after he was downed by Siz. Possession of PD grade weapons was a raidable offense, with a resulting jail time of 300 months/$15,000 fine per stolen weapon (Siz would have been jailed for an equivalent of 1200 months for the four stolen PD weapons).

A few weeks later, Dias moved into the house two doors down from Siz, which yielded great disdain from Siz, as he now had to contend with yet another neighbor he does not like. In fact, Siz's first formal welcoming of Dias to the neighborhood resulted in an extended confrontation, and eventually resulted in Siz kidnapping Dias right off of his property for use as a hostage in a Fleeca Bank robbery. Dias eventually moved off of the property to a new location in Paleto with the other officers. He sold the house to Siz, who immediately put it to use as a stash house for Kray-Tor, after transferring it to one of his HOA cadets.

Siz and Dias interactions temporarily came to a screeching halt when Dias was suspended from the police force for three days, following the use of a flashbang against Siz. The flashbang was a request on Siz's part, as he had been trying to experience the effects to "build up a tolerance." Dias offered to meet him in a remote location to test it out.

After his suspension, Dias returned to duty; but interactions between the two were sparse ever since. In addition, their few interactions together became much more hostile, as Dias had (in Siz's eyes) sided with Lauren Forcer. This created tension between them, as Dias came down hard on the HOA's actions, in an attempt to impress Lauren.

Prior to his death, the last time the two interacted was when Dias apprehended Siz for the execution of Tsury Nanakaze. Dias witnessed the act from a police helicopter he was flying and was super surprised by Siz’s actions that day.

When Siz was told that Dias had passed he was quite indifferent about the event, so much so that his immediate follow up question was whether or not his death would have an affect on an upcoming court case of his (as Dias was the primary witness who filed the police report against Siz for the murder of Tsury). Denzel later gave Siz one of Dias' pistols, which he retained until the 3.0 economic collapse caused the government to seize all of Siz's items. 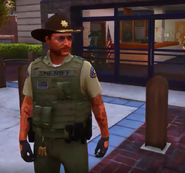 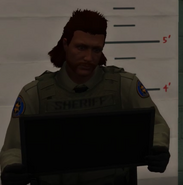 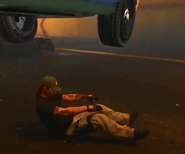 On Top of the Situation

Detective Dias Stumbles Upon on a Siz 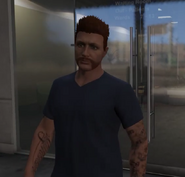 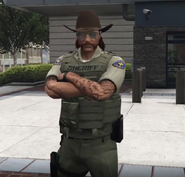 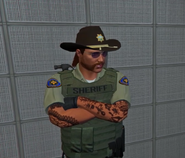