Mia spends her time doing petty crimes and interacting with people around Los Santos. She won't typically rob others but if she does, she will allow her victims to keep their money. She typically has a low patience for people and situations. Her favorite weapon to use is a hammer because she isn't comfortable wielding any kind of firearm. Due to her low patience and refusal of gun use, she avoids hunting, fishing, and any activity that are tedious and repetitive (except deliveries, as this is a fast, easy way for her to make money).

She is known to have a silver tongue. She's quick to take a leader position and is not afraid of engaging in action or pursue her interests solo. Strangely enough, she enjoys the officers and inmates at Bolingbroke Penitentiary and playing around with various law enforcement officers whenever she gets the opportunity.

Her text messages can be difficult to translate at times due to being loaded with short-handed words, acronyms, and lack of grammar usage. In conversations, she frequently uses British slang (such as referring to police as rozzers).

Mia's critical moments were captured below in chronological order.[1] Spoilers may be included.

Assault with a Deadly Weapon Tally[3] 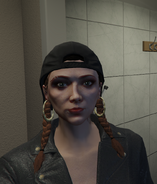