Meredith Jenkins is a character role-played by TheAmelina.

Meredith is an intern doctor at Pillbox Medical Center. Previously, she worked there as an assistant.

Meredith was born after a one-night stand, between her mother Kathleen and an unknown English man. Kathleen never got his phone number, and kept his name a secret from Meredith.

Even though she was born in The Netherlands, Meredith got an English name due to Kathleen's obsession with the United Kingdom. She grew up watching several British tv-shows (detective shows were Kathleen's favourite), and her mother has always talked dreamingly about visiting the UK at some point. That never happened, as the Jenkins family struggled quite a bit with money.

Due to their monetary problems, Meredith became quite the laughing stock to her classmates and so-called 'friends'. Ever since primary school people noticed that she couldn't afford the clothes that some others got, or she wasn't able to go to the same vacations as others did. It never occurred to her that her vacations or life were different, until people started to point it out all the time.

When Meredith was 13 she caught an episode of the first season of Grey's Anatomy on television, and she was instantly hooked. Due to her name being quite rare in the Netherlands, she was instantly triggered when she noticed someone with the same name as her on television. Meredith Grey was someone she aspired to be: respected, hardworking, successful. Ever since that day, she dreamed of become a doctor herself - and not just any doctor, no, she wants to be the best doctor she could possibly be. No one in her environment took her seriously about it, though. They laughed, saying that she could never be a doctor, that she wasn't 'the right fit', too stupid, trash. Unable to afford medical school, Meredith started working in a supermarket right after she graduated secondary school, and after her mother passed, a mere two months after Meredith celebrated her eighteenth birthday. She worked a few years, gathering up the money needed to move to Los Santos, ready to try and fight for her dream where no one knew her background.

Meredith has expressed on multiple occasions that she wants to be a kind person, and that everyone deserves to be treated with kindness. This is linked back to the way she was treated while growing up, being excluded from everything, or bullied without cause. She never wants to hurt anyone, and tries to avoid that at all costs. When she feels like she has hurt someone or made someone uncomfortable, she quickly backtracks to try and save the situation.

When asked out on a date or asked for her number, Meredith tries to avoid having to say 'no' straight away and potentially hurting someone's feelings. She starts to talk a lot, in the hope that she can avoid hurting anyone's feelings or full on rejecting someone. She is open to dating, but wants to get to know people before expressing any feelings or relationship potential.

Meredith tends to joke around a bit as she's getting more comfortable around people. When she feels like the joke doesn't go down too well, she feels really bad and tries to mend the situation.

Friends are very important to Meredith - she is willing to go very far if her friends need her. Friendship was rare for her growing up, and she is very fond of her friends so far. She doesn't hide the fact that anyone who hurts her friends could face her crowbar. 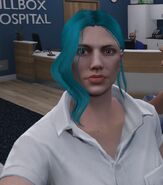 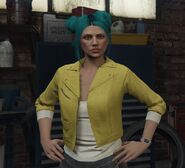 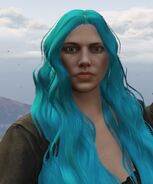 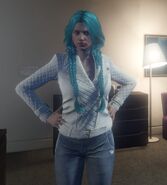