The Church of the Blood God

Mel Rickenbacker is a character role-played by Spaceboy.

Mel Rickenbacker, known as "Mel", is an old elderly citizen of Los Santos with a flair for chaos. He is a founding member of Prune Gang and is an affiliate of Chang Gang.

Mel is noted for being an agent of chaos, doing whatever he wants in the city regardless of the consequences. This may include blowing up cars in the Alta Street Apartments, randomly asking people for $5000 in his underwear, and manipulating rednecks to kidnap cops.

As of now, Mel is a taxi driver despite having no licence. His car is identical to Abdul's, except it is painted green to match his shirt.

On July 15, 2021, Mel was sentenced to death with his execution being scheduled for July 20, 2021 at 6PM EDT. Minutes before Mel was set to be executed, Mayor Denzel Williams granted him clemency. The following day Mel was granted parole, but has to return to Boilingbroke every night for 7 days.

Mel is a wily gentleman who finds himself in peculiar situations. Despite his often kind and innocent demeanor, Mel is deceptively intelligent and highly dangerous. Though he is on the older side, Mel is known to be "ride or die for his homies" and has absolutely no sympathy for a "snitch bitch".

Back when Mel first met Eugene Zuckerberg, they decided to form the Prune Gang. Initially, it consisted only of elderly citizens, which originally included: Eugene, Mel, Gladys Berry and Gordon Parks. In its golden days, Prune Gang was seen as one of the most chaotic gangs in the city and its members have been arrested numerous times.

Mel was once a professional wrestler known as "The Fella." He toured the world with the Worldwide Wrestling Corporation (WWWC). He was the WWWC champion from 1975 to 1989. He tore his ACL and now wears a knee brace.

Mel has been married to Trish Baggs since March 2019. They first met on a blind date set up by Eugene. Mel became completely enamored by Trish and, on the very same day, asked her if she will "take his hand and grip it with her 'firm slug' in marriage". Later, they went to the Prune Gang turf, the cemetery, for their wedding ceremony. There, they were pronounced husband and wife to the sounds of explosions.

Nowadays, he is usually seen causing chaos in the city with the likes of Four Tee, Fingle Dan, Abdul Al-Rahim, and the Blocks. He once fought with Mike Block over their positions on Four Tee's friend list, with Mel being #2 and Block being #1.

Mel has one of the worst records in the city: 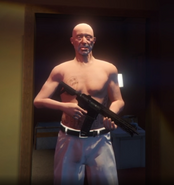 Mel with a new acquistion 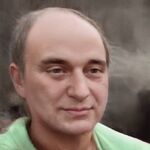