Max Muller is a character role-played by KinkyHobo.

Max Muller is a Senior Officer for the Los Santos Police Department, Badge #431. Max Muller is an Officer with previous experience, serving for a year in the State of Silver Lake from 2017-2018.

Max Muller was born and raised outside of London, he spent most of his formative years on a small, little farm and has always been a keen nature lover. However, over time he fell into city life as he moved closer to the center of London. Max spent his University Career studying Forensic Sciences, specializing in Forensic Anthropology, he continued on to a Masters Degree. After graduation he began working with the Met Police. Since his graduation he has been passionate in the sciences around the subject and ensuring it’s always properly utilized to the best of its abilities.

In November of 2016 he transferred to Silver Lake Police Department, working as a Police Officer for the period of a year, hoping to head the restructuring of the Forensics Departments available in the Nation State. However, after a year within the Police Force he was requested to go undercover, but was immediately made by his targets. He was kidnapped and taken hostage, forced to sit down at the Old Carnival at the North of the State, forced to answer trivia questions where no matter the answer he was punished. When Police cottoned on to his kidnapping he was pulled by the kidnappers to the Casino. When a failed breach occurred the building, which was rigged to explode at structure points, went off causing Max to be trapped under the rubble and hospitalized. Without an expectation of recovery he resigned from the Police Department, unable to perform his active duties and returned to a lab position back home to recover.

After eventually recovering enough to go back onto active patrol whilst working with the Police Force he was seconded to positions working with the Rwandan and Kuwaiti government for a year. His time within the countries were grueling and left a miserable impression of his career path on him.

He eventaully moved to Los Santos after taking a LOA for his mental health, hoping to find a new beginning within the Unified Police Department of the Nation State of Los Santos.

Whilst Max was still a Solo Cadet within the Los Santos Police Department he was sitting inside his CVPI enjoying his lunch, he took a small nap within the driver's seat after calling out that he’d be 10-7 for the period. As he slept an individual; Seven Lighthouse, stepped onto the hood of his car and slowly began to pour gasoline over the vehicle, once Officers saw what Seven was doing he pulled a Class-1 Firearm from his waistband and shot at the pool of gasoline sparking an immediate fire. Max woke up from the gunshots and in a panic reached for his service firearm, allowing time for the fires to swell, the heat slowly melted the door shut as it engulfed the entire right side of his body, Senior Officer Pinzon quickly ran to the vehicle and broke the window, pulling Max from the burning wreckage after Max had passed out from the smoke inhalation, whilst Senior Officer Vale shot down the attacker.

The aftermath of Max’s burns left the entirety of his right side scarred, most distinctly shown on his face. The burnt areas of his body slowly began to numb during healing, stopping him from feeling soft touch on the right side of his body and needling pain around his right shoulder when he moves his arm. Due to the nature of his burns, and how prevalent they are across his body Max has stopped wearing clothing that reveals his skin, ensuring that the questions regarding his scars remain at a minimum level. Whilst at first self conscious of them, Max Muller's scars are now a strong identifier to himself and are a part of him which he has grown to accept and embrace.

Seven’s motives, if any, were largely unheard due to his failure to appear or testify in court and was subsequently prosecuted for his actions, receiving the charge of Terrorism to be placed against him without rebuttal from his counsel. 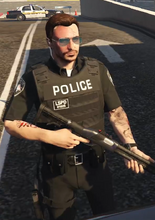 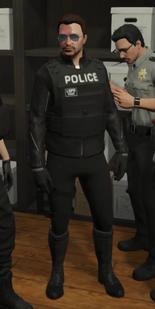 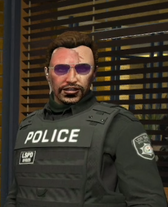 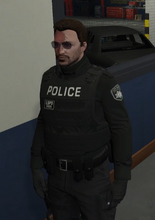 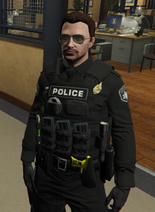