Gay Gang
Maurice Jackson is the leader of the Gay Gang, he is role played by Jayce

Maurice Jackson arrived to Los Santos May of 2020 with his best friend, Squid Gee soon after created Gay Gang inviting his gay friend Squid. The Gang has been rocking ever since.

Maurice's relationship with Chang is odd. They had a little something going before Maurice broke up with him for Big D. They are currently frenemies even though Maurice and Chang have admitted to having feelings towards each other. They have yet to pursue each other.

Big D is Maurice's ex boyfriend. They broke up after Big D confessed about his love for Chang. Maurice kidnapped Big D to make Chang jealous but asked for Ramee in return of Big D. Big D says he still loves Maurice and said he thought they were in a open relationship.

Maurice's and Ramee's relationship started when Maurice and Squid Gee kidnapped Ramee. They exploded him in a meth lab. Due to this Ramee didn't trust Maurice and looked traumatized. But their relationship became something more when Ramee was put on a job to distract Maurice so that Chang Gang could kill him. Chang being the troll he is allowed the "Date" to continue far longer then needed too. This resulted in Maurice robbingRamee and escaping. The CG caught him and ever since Ramee has showed a very caring affection to Maurice. (Clip of Ramee reacting to Maurice's fall)

Maurice met Carmella by Squid. After getting going to the Park playground together with Squid Gee they convinced her to do a makeover to "fit in" with Gay Gang they told her to pay them for the makeover which she denied resulting into a robbery. Carmella forgave Maurice. They were "Party Friends" meaning Carmella would call Maurice if she was planning on getting drunk or going to a party. They were on good terms till' the 9th of May 2020 where Maurice thought it would be funny to burn Carmella's jeep (Gigi). This made Carmella a bit mad considering she just got the car back, but once again she let it slide and blamed it on Coop. But on 10th of May 2020 Maurice decided to kidnap Carmella and make her go bald and make her change her makeup into a clown because she was "Too Pretty". He then left her on the streets. This made Carmella mad and distrusting towards Maurice has he said he would kill her. Maurice and Carmella have a love/hate relationship as they currently on good terms. (May 5th, 2020)

Squid Gee is best friends with Maurice. They arrived to Los Santos together and created Gay Gang together. They created a lot of chaos between Chang Gang and them making them well known. They are both gay, but have no romantic interest in each other. Squid Gee left town for a week, but came back May 11th of 2020. They are currently on good terms.

CJ is Maurice's cousin. CJ is part Grove Street Ballas which benefits Maurice by respect due to CJ's reputation in Ballas. They are currently on good terms. 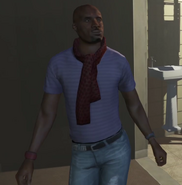