Matthew Espinoz is a Senior Deputy for the Blaine County Sheriff's Office. Badge #389.

On October 3rd, 2019, Espinoz was promoted to a full deputy within the BCSO.

*sounds of Espinoz getting shot* 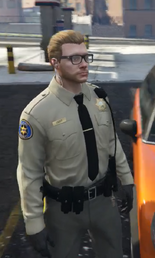 Old Look
Add a photo to this gallery
Retrieved from "https://nopixel.fandom.com/wiki/Matthew_Espinoz?oldid=44023"
Community content is available under CC-BY-SA unless otherwise noted.