Marlo Stanfield is a character role-played by Lucky_RP.

Marlo Stanfield works at Diamond Casino and Resort as Security, manages Diamond Hand Credit and PCA. He was formerly a G of The Families but was blooded out.

Marlo assisted the Vanilla Unicorn with their day-to-day operations which included acquiring ingredients for drinks, bartending, and providing security during events.

Marlo is currently working for the Diamond Casino and Resort. He was originally hired for security but has quickly become the go-to employee for anything Otto Delmar and Dean Watson need.

Marlo runs the BJ Smith Recreation Center and Park. The Rec Center is a non-profit organization aimed at getting the drug-addled children off the street by giving them a helpful place to spend their day. Marlo is currently working on fundraising for the Rec Center. He is planning on running a variety of public and private classes for people in Los Santos to attend.

Fiona, Gloryon and Marlo on a boat around Tiger sharks at east of Pacific Ocean, near San Chianski Mountain Range. 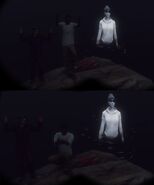 Gloryon and Marlo posing next to Jackie's Ghost.