Smoke On The Water

Mari McKay is a character role-played by ChandraViperdae

Mari McKay grew in leaps and bounds after moving to Los Santos. When she first stepped foot into the country, and city - she lacked 'street smarts's. She grew up in a small country fishing town in Australia so had little experience with big city life. Now, she embraces it. Having experienced first hand how harsh it can be. She once believed in the good of everyone, and trusted too easily. Now she's bubbly and kind to all, but trusts very few.

On the outside Mari is usually bright, cheerful, and always down for something fun. She works hard at everything she does and her chipper personality draws people in - however she seems to exhibit strange sociopath tendencies. Randomly saying things like 'wouldn't it be fun to feel someones neck crushed between your hands' and commenting on 'I hear the palms of a person are meant to be tasty' These are seemingly harmless as Mari prefers non-violent approaches to things but she has been known to become violent if necessary. Especially when it comes to her friends and loved ones.

Mari can be quite insightful when it comes to various different topics. Especially that of death and grieving. Mari is ferociously loyal to those who do her good, and would never betray them.

Mari has an addictive personality and can easily find herself addicted to various substances and activities in Los Santos if she is not careful.

She does her best to be independent but also hopelessly clings to those she cares about. Even displaying an extreme, often violent or psychotic, level of devotion to a loved one.

Mari lived in a rural fishing town in Australia. With her mother. grandmother, and youngest sister. An unremarkable and boring life for most of her time but there a few key events that stand out.

At age 15- Mari was on a trip with school friends in the wilderness. They, in a cruel joke, drove off and left her there. Mari was lost and spent three days surviving on her own. She had to kill, cook, and eat native fauna and flora and describes the time as 'literally shitty' due to this, Mari doesn't shy away from interesting foods - and even developed a curiosity for what all kinds of meats taste like. She also learned that not everyone is her friend.

At age 18 - Her family went on an overnight fishing trip, a usual occurrence for them - they were caught in a flash storm. Her and her youngest sister (Nellie- Age 5) went overboard. Mari was rescued but her sister was lost. Mari blames herself for this, and wishes that she was taken by the sea instead. Mari is wracked by guilt of being saved over someone so young. Mari used a mixture of Alcohol, codeine, oxy, and prescription drugs, and reckless behavior to cope with this.

Her mother had remarried and Mari, along with her new family moved to the United States. However, feeling displaced, Mari chose to move to a different city, Los Santos. She wanted a complete change of scenery and a fresh start to help her move on from tragic events.

CHILDREN OF THE LILLY

Return to the HOA Freddy and Mari bought a house in the Mirror Park Cul De Sac. Mari supports Freddy in his endevours within the HOA, but often feels left out, always being on the fringe of the group. She knows a lot about what they do, sell, and who their members are - and what they work with but she keeps silent. Saying simply that she is not HOA nor is it her place to be involved.

UwU About 3 weeks before the cafe opened Ash asked Mari if she wanted a job, Mari said sure - and worked hard at the booth for a few weeks. When the cafe opened, Mari stepped up her game and took charge, quickly seeing what needed to be done and sorted, then did it. Because of that she was promoted to Floor Manager. Mari is usually seen at UwU Cafe, and hangs around many of the Seaside members.

Mari's Fiance- Someone Mari didn't ever expect to see in a light beyond 'that crazy lunatic who kidnapped me in a bank heist once' they since became fast friends - and it wasn't till recently, when Freddy asked her on a date that Mari originally reluctantly agreed to go on that she realized how much fun she had with him, and how much she liked him.

Since then this madman has been overly protective of what he sees as a fragile Mari but rarely listens to her when she is trying to talk to him due to his crippling ACDC, which causes nothing but troubles to very serious topics.

They moved into a small house in Vespucci near the Billabong which is under Mari's name. Purchasing this house with help from Freddy's habits of non stop grinding money when he needs and loan. Repaying this is no problem for the mischief maker.

Freddy proposed to Mari during a discussion on his future between BBMC and HOA - Mari told him she'd always be by his side and Freddy proposed. Stating she was the only person he could trust with everything, and anything.

'Mari falls out of a Helicopter'

Mari gets kidnapped by Mari

'Children of the Lily scout meets with Mari....' 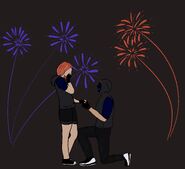 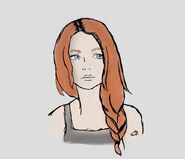 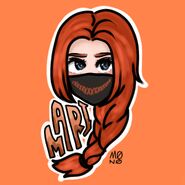