In a relationship with Chet Manley

Mari Jones is a character role-played by Maggna.

Mari Jones was a resident doctor at Pillbox Medical Center. She was a Paramedic FTO for the Emergency Medical Services; call-sign Papa-2. She is a workaholic person who loves helping people around her. From giving free rides to giving away huge amounts of money, she doesn't actually care if it is to help other people even just a little.

Her soft voice and flirtatious personality makes her a constant target of the men in the city's cheesy pickup lines which amuse and bother her at the same time.

Since she is serious on her job and being part of EMS High Command, MJ was addressed, mostly by Khloe and Bambii, as "Mom" whenever she was on shift with them.

After her father died during a call as a firefighter, due to a lack of ambulances to transport him to the hospital to get treated, MJ fell into a five-year depression stage before deciding to move forward and become a paramedic in order to prevent what happened to her from happening to other people.

After moving to Los Santos and getting started as a volunteer at Pillbox Medical Center, she started to understand the love and passion her father had for his job and saving the lives of people who couldn't do so themselves. Building a love for the community in her work as a volunteer, Mari pushed herself to her limits in order to get accepted into the EMS department.

Starting her second day in the city, Mari volunteered at the local hospital to be a medic. After four months she went up on the EMS ladder going from a simple volunteer to a Captain of High Command. Her hard work and love for saving people's lives made her the perfect candidate to become High Command on the EMS front lines.

A restructuring of EMS put her in the position of chief, making decisions that will hopefully benefit the longevity of EMS within Los Santos.

On February 3rd, 2020 Mari was kidnapped by The Menagerie and stabbed, citing her sin as sloth. Mari spent the night in critical condition, her heart stopping multiple times are she struggled to find the will to live.

On February 4th, 2020, Mari awoke from the ICU and decided she would resign from EMS, effective immediately, citing stresses of the position and the kidnapping as the catalyst for making her realize it was time to change gears.

On February 9th, 2020 Mari started her residency as a doctor in training at Pillbox Medical Center. A few days later, she was cleared to work with any fully trained doctor.

On February 15th, 2020, Mari was cleared for solo duty and spent a large amount of time working with new patients. She often found herself doing surgeries and doing everything she could to save the few patients who made it to her table.

After long shifts and slow days, Mari realized that while she loved her medical work, she missed being on the front-lines. She missed being a first-responder to the scene and stabilizing patients before they arrived to the hospital. After speaking with both the Chief of Medicine, Dr. Serge Cross, and EMS High Command, Khloe Brooks, Mari resigned from her residency to resume her work as a Paramedic FTO within EMS.

Mari met Mikey multiple times during her time as a volunteer. He often found himself injured from car accidents or trying to help people. Easily enough, they hit it off and were soon spending much of their time together. Mari's first tattoo was a flower on her back right shoulder, a tattoo that Mikey had picked for her and one of her favorites.

Time passed and eventually they started spending less time together as Mikey found work away from the city center. This eventually led to a dramatic breakup, where communication had broken down and Mari decided she needed to move.

Mari first met Jordan as a volunteer, when her ambulance broke down in Paleto. They hit it off as fast friends, and though she was dating Mikey at the time, they still found time to hang out together. After her breakup with Mikey, Mari started dating Jordan.

When Mari was offered a position in EMS Command, she was given a stipulation. If she wanted the position, she had to cut ties with Jordan. After weeks of debate, she eventually made the call to cut her romantic ties with Jordan, thus ending the relationship. They fell out of contact, both moving on with their lives.

A few months later, after Mari had been promoted to Chief, Jordan contacted her and they re-established their friendship. One thing led to another, and they found themselves dating again, much to the happiness of those around them. It wasn't meant to be though. After 7 months, their relationship had ended a second time, and this time, Mari has no plans to return to him.

Mari's loyalty to Jordan is unmatched. Even though they have split a second time, she will continue to do what she has always done for him.

Sarah and Mari were medics of the same class. At first, they worked in different counties, rarely encountering each other, but as the counties merged, they found themselves fast friends. While Sarah was a medic, Mari covered and held Sarah's secrets. Their bond is that of blood sisters. Although they spend little time talking these days, Mari knows Sarah will always be there for her, and therefore, Mari will always be there for Sarah.

Bailey is a medic trained by Mari and other FTO's in the department. It took Mari a long to remember Bailey, as she is terrible with names, but eventually they established a fast friendship. It has been said that Bailey is a mini Mari, and in a sense, that is true. However, where Mari has become hard and experienced the city through tough experiences, Bailey still retains an air of innocence.

Mari is willing to confide in Bailey to a further extreme than she has often confided in Jordan or Sarah. As one of the few people who Mari feels falls under her umbrella of friends, Bailey is someone she would risk her job and life for to protect. 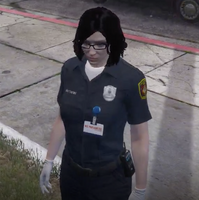 Mari as Chief of EMS
Add a photo to this gallery

Retrieved from "https://nopixel.fandom.com/wiki/Mari_Jones?oldid=81595"
Community content is available under CC-BY-SA unless otherwise noted.