Marco Holliday is a character role-played by Chalupa_Pants.

Marco Holliday is a Deputy for the Blaine County Sheriff's Office, Badge #328. He was a former Corrections Officer for the Department of Corrections, Badge #789.

Marco Holliday was a former police officer for the Silver Lake Police Department. He is also a ride-along for the Los Santos Police Department hoping to become a deputy for the Blaine County Sheriff's Office one day. He was hired as a Cadet for the BCSO on May 13th, 2021. 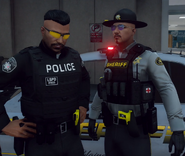