Mantis Tobagan was a character role-played by Mantis.

Mantis "Akmir" Tobagan was a war veteran. He served in a war overseas with his old buddy Officer Jordan Steele. He arrived in Los Santos to attend Jordan's divorce trial from his wife Jean Steele. Once Akmir arrived in the courtroom he stood in the back next to Justice Dennis LaBarre who threatened to have him removed from the courtroom for applauding for Jordan during the trial. During a court recess he briefly reunited with Jordan and said that he was on the No Fly List and had to travel by boat. They secretly spoke in a bathroom and Akmir took a flashlight from Steele and plotted to attack Jean during the trial. During the trial, Akmir expressed a need to go speak with Jean because he claimed he had not seen her in a while.

On January 20, 2020 Akmir approached Jean and he took out a flashlight and attacked her. He was then shot and killed by police. As he laid dying on the courtroom floor he shouted "This is for you Jordan! I did it for you, I did what you wanted!" 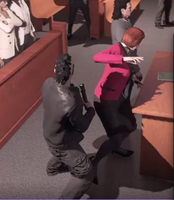