Mantis is fairly new both to Roleplay and Streaming, starting with his oldest character Jerry Callow on NoPixel, famous for being the "Predator of Mirror park". He got partnered on Twitch on the 2nd of April 2020.

"He loves to drive."

2.0: He is a Senior Officer of the LSPD, Badge #419. Before becoming a full-fledged Officer he remained a Cadet for 4 months, therefore earning the title "Chief of Cadets". He led an investigation regarding Mr. Robert Rodgers that resulted in him serving 18 years in Bolingbroke Penitentiary, on the counts of 6 attempted murder and 1 count of murder. Leading said investigation finally got him signed off on Investigations. He recently got certified as a Field Training Officer and is now a Detective in the Joint Task Force. Since his FTO Cert he's trained most of the Cadets in the September of 2020's Class, focusing on communication, processing, and actively helping Tessa Lamb in the "Tramp Killer" investigations as a supervisor for JTF, and since it's also his first case as a Detective, he's being supervised by Trooper Copper, a Captain in the Task Force. 3.0: TBD

"All water is sand!" 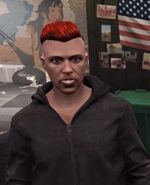 He and Alex Marshall are the Founders of The Frat, the members are mostly FSU dropouts and graduates.

No love for Toretti. Made by TutorialB0ss (uploaded on Discord)