Mando Thompson is a character role-played by ItsSammyP.

Mando Thompson, is a former OG of the Ballas, the revived and reformed South Side Ballas/East Side Ballas gang. Growing up on Grove St. made Mando the ruthless and emotional individual he is today. He is the son of the Ruthless Fake/Yellow Page Balla Killer Tyrone "Big T" Thompson. His mother is unknown.

Mando possesses great charisma and uses his South Side charm to his advantage. He makes quick judgements of character and can either be a great friend to have ... or your worst enemy.

Lukey Deep-All the girls in the city ft Mando 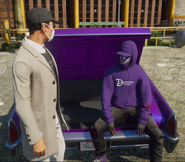 Mando and Nino Chavez recap after his return to the city