The Mandem Block, sometimes referred to as The Mandem Compound, is The Mandem's base of operations, where they live and have most of their meetings.

After months of waiting and wanting to make the block their home, when new properties arrived in Los Santos, The Mandem hoped it would listed in it. Unfortunately, it was not. After building its reputation in the city as the Mandem Block, it was finally approved by the State upon the request.

On 21st December, 2021, the construction began little by little, with the garage being added first, courtesy of Francis J Francer who owns the Realtor business. The next day, apartments were available for purchase in the Block. Two days after this, a ladder was added, the removal of the construction equipment next to the pool, a wall on top of one of the buildings was removed, bridges were added between the buidlings and a Mandem spray tag was put over the billboard in permanent paint.

On December 27th, 2021, major construction was completed on the block. This included fences and gates at all three entrances, access to the third floor of the apartment complex, United Kindom flags at the main entrance, Mandem paint at the meeting spot, water in the pool, a table tennis table (in memory of Remy Brown), a football goal painted on a wall, the removal of the billboard and the addition of a mural featuring all nines members, as well as the door to Adam's apartment being made shorter.

On December 30th, 2021, more construction was done on the block. This included the bricks being changed, the entire block being repainted to grey, as opposed to yellow, a 'No Ball Games' sign next to the goal, 'Did you die tho?' graffitti on one of the walls, the removal of the sunloungers around the pool, the removal of the palm trees, additional cover on top of the roofs, additional hatches on the roof, added cover to the ladder on the main building, added a microphone and speakers on one of the balconies, added a 'No Backseaters' sign in the parking area and access to the first and second levels of the secondary apartment building.

On January 25th, 2022, while in a war with BBMC, before they began shooting for the day, Mandem wanted to make sure what they could call their turf and what they couldn't. They discussed for a few minutes and after talking to each other and discussing, they decided to call the whole of Cougar Avenue and Prosperity Street around the Block, making the neighbouring the buildings part of their block which would allow them to move freely more.

On May 9th, 2022, a red telephone box was added next to the mural side staircase, and a fence was added on top of the mural side building to prevent people from climbing onto the roof from the outside.

On May 15th, 2022, all of the roofs on the block were flattened. More hatches were put on the roof, some of people can climb through and access their apartments. Multiple large boxes were added on to the roof to act as cover. 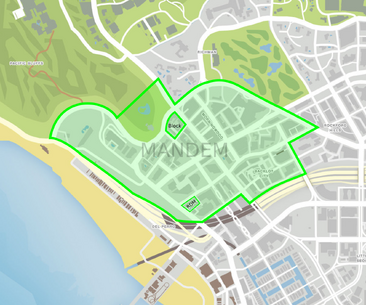 The Construction and Renovation of the Block is completely free of charge.

Mandem have been trying to get new business started near the block, on the mdm turf, which should be up and running soon (copium). List of business's located in the turf in alphabetical order:

The keys to Block are tied to MDM Records, which gives people with a certain role in the business access to the places.

The Mandem on the block, before renovations

The MDM mural at night

never drown with Remy Brown, a memory of OG at the block