Malakai Anderson is a character role-played by Realzman.

Malakai Anderson is a man in his mid twenties often seen sporting aviator sunglasses with spiked, frosted hair. He is very personable, easily making friends with most people and is a skilled salesman/swindler despite his noticeable speech impediment. He is often seen alongside Riley Carter, who he is unyieldingly loyal and infatuated with.

Under his alias Lemonhead, Malakai was one of the OGs of the racing scene after the economic collapse. He was often a regular sight at races hosted by Headeyes before the racing app was created. Malakai was previously a member of Bondi Boys MC, joining as a patched member on the recommendation of Riley Carter. He works as a senior salesman and mechanic at Ottos Auto as well as a loan officer for Diamond Hand Credit. As a member of the racing crew Redline, Malakai holds a high standing in the racing scene as well as two quarter-final finishes in the MRL. 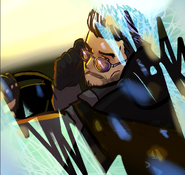 Malakai in a stolen car Made By @PKSlap from twitter 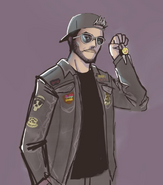 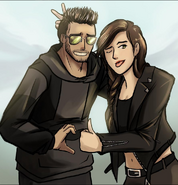