Maddison Bancroft is a character role-played by Aaoki.

She was previously a Deputy for the Paleto Bay Sheriff's Office, Badge #383.

Maddison was born out of San Diego, California. She lived in a relatively quiet neighborhood, everyone was friends with each other and there would quite often be neighborhood parties. Maddison was seen as a bubbly child who had been doing really well in school. She would always get A’s on her tests in school and really enjoyed playing with her friends after school. She had always had a rebel side to her well she liked to call it that where she would ride dirt bikes for a bit of fun or miss classes every now and again but nothing to major. At the time she had no other siblings; she was an only child. Maddie had a few friends but she always liked to keep her friends in a small circle. Maddie always liked to try new things whether it would be a new cool trend or something new and exciting she would never say no and she always would feel bad in doing so. Maddie also liked to play the guitar in her spare time and would take lessons every monday. Her mother Charlotte Bancroft was a successful cafe owner running a small cafe out of the streets of san diego, whilst her father Hayden Bancroft was very much involved in the military sides of things.. He was a Sergeant in the United States Marine Corps and would often not be home due to going on deployments overseas.

It was a cool winter night. The wind was blowing and snow was falling slow and softly to the floor, almost as if it was floating. Maddison was 14 at the time… both of her parents were downstairs preparing Christmas dinner. It had been getting pretty late and the family were beginning to wind down after a long day of Christmas celebration. Maddie was laying up in her room reading a book or two about a few good old Christmas stories.

The night continues, It gets colder and the wind from before had seemed to pick up. As a few hours went by, Maddie realised it was getting late and hadn't heard anything coming from the kitchen in a while, her mom and dad were going through a rough patch at the time so yelling around the house was very common.

Maddie had decided to get out of bed and open her door, She had noticed something off about the situation. Maddie looked around to see if her parents were upstairs and proceeded to check their room to see if they were there but they were not. Maddie was alert at this point that something was not quite right. As she walked into her parents' room she had noticed something off. Something wasn’t right. As she walked she felt crunching beneath her bare feet. She proceeded to look down to find small shards of glass all over the floor of her parents' room. Her feet were bleeding at this point due to the glass on the floor and it being incredibly dark. She noticed that the window that was on the side of her parents' room was smashed. It wasn’t smashed from the inside, rather it was smashed from the outside in… She noticed near the glass that was left on the window that there was a slight piece of clothing from something like a hoodie or something of that nature she was unsure of at that time. Maddie continued to look around the room to notice that the revolver that her father always kept on his bedside table was missing, Maddie was extremely concerned at this point.

Maddie knew something extremely off was taking place, She decided that the best place of action was to stay quiet and hope that she was just imagining things or she was overacting. As her heart was beating faster, she could hear bangs almost as if signs of struggle were coming from downstairs. Maddie decided she needed to see what was going on for the sake of her sanity to make sure everything was okay.

Maddie had decided to make her way towards the staircase. She was struggling to walk due to her feet being cut by the glass from her parents' room. As she walked out she noticed something downstairs. Something was extremely off… Maddie was beginning to hear things from behind her but before she could turn around… she blacked out… turns out the people that broke into Maddison's house had knocked her head from behind with a blunt object causing Maddison to fall unconscious.

25 minutes had passed at this point... Maddie had slowly woken from her unconscious state, her vision was extremely blurry and she was unable to see what was going on in front of her, Her hearing was muffled as she was awakening but she was able to hear out something along the lines of voices of scream and panic but this was also muffled… as Maddie continued to return from her unconscious state she had noticed blood was dripping from her head due to the blow to the back of the head from a blunt object. She notice that her hands had been bounded by duct tape and rope to the staircase railing, her ankles were bounded together with rope and duct tapped making it almost impossible for her to move in more ways than one. Her mouth was also duct-taped shut

Maddie continued to make her way to a decent conscious state, as she was doing this she proceeded to look around to see what was going on she noticed a lot of things that were just off-putting… three individuals all dressed in black with Santa masks were standing around two chairs that were in the centre of the living room. It took Maddie a second to realise what was going on. And who was in the room with her? But when she released tears had begun to shed from her eyes. On those two chairs that were in front of her both her parents were bound by rope and duct tape. Along with their legs which were bound to the legs of the chair….

Maddie was still trying to comprehend that three people had just broken into her house and taken them essentially hostage in their own home somewhere where they were meant to feel safe. The individuals with the Santa masks had pistols all in their hands. A Santa had then proceeded to look at Maddie as he put the gun to her fathers head. Another Santa had approached Maddie and held her head looking directly at her father so Maddie would be unable to look away. They did the same to Maddison's mother. They removed the duct tape off of both the mother and the father. Her mother began to beg them not to do this and for them to shoot her instead… The individual with the Santa mask holding my mothers head began to laugh… Maddison will never forget the daunting, low toned laugh that occurred at that very moment it still haunts her. Tears would be shed from everyone in that family that night, A Santa that was there proceeded to put on a Christmas carol… “Last Christmas... But only those two words would repeat over and over. Maddie began to beg the individual to stop what they were doing. She panicked and cried in a hysterical state and then…. Bang… a loud, quick bang could be heard… Maddison realised that what she had just witnessed along with her mother was her father being shot in the head and they both had to watch. Maddie was shocked. Worried… and scared as hell she was terrified and frozen in fear...They then moved on to Maddison mother and began to laugh. With the same daunting laugh as before. They then proceeded to grab Maddison's fathers pistol… they would remove all bullets but one… they then proceeded to place the revolver to her mothers head they would begin to sing Last Christmas and every time the song would restart. They would pull the trigger on the father's revolver. Playing Russian roulette with the revolver. A few repeats go by of the song. As Maddison's mother is screaming and begging them not to do this Maddison is screaming for them to stop…. And then…. Another bang was heard… this time it was Maddison mother who was now shot dead in front of her… Maddison was frozen in fear and sadness and realised that she was the only one out of the three remainings…all three of the Santas proceeded to approach Maddie… they looked at her. It's a stare she will never forget. She realised that one of them had a pistol still in their hand. The individual put the gun to Maddisons head and laughed. He acted as if he was going to pull the trigger. These individuals wanted to make Maddie suffer and she never understood why… They decided that instead of shooting her in the head. They would shoot her in both legs making her slowly bleed out… so they did… These individuals then proceeded to leave the house they walked out into the cold winter snow as Maddison watched them walk away into the distance... A couple of days later neighbours put out a concern that they hadn’t seen the family go out since that night and they would always go out. Police arrived to find both Maddison's mother and father deceased and Maddison had fallen unconscious due to blood loss. The police had proceeded to investigate the case for a very long time but were never able to find anything concerning the incident or leads that would lead to the arrest of the suspects… the suspects were never seen again….

This night had changed Maddison forever…. She struggles to cope with every Christmas due to her past. She generally turns to other means to deal with the pain of situations and it's generally the wrong way to deal with it…. This also is where Maddison protective side had come into play. Everyone she cares about will always make sure they are okay. She tends to always blame herself for others she cares about getting hurt. As she feels she could have done something to prevent the situation but it's generally not the case.

Maddison had moved to San Andreas to start a fresh new life. She had proceeded to become a lifeguard on the beach to make sure she could do whatever she could to help people no matter what it was... 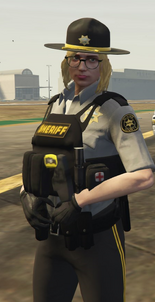 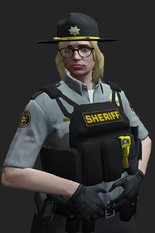 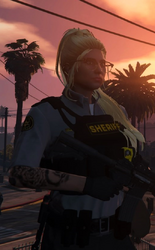 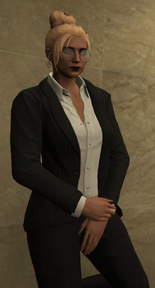 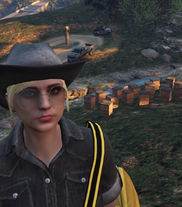 Odessa and Maddie chatting on top of the Kortz Centre. 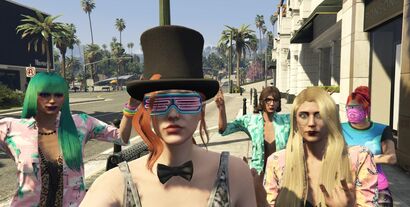 Maddie with Odessa and friends on O's birthday. 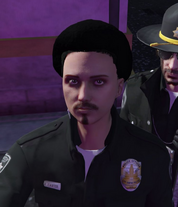 Maddie and Carter for Halloween 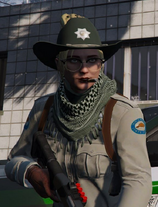 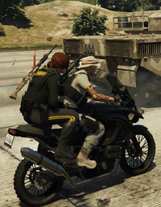 The War of Sandy Shores 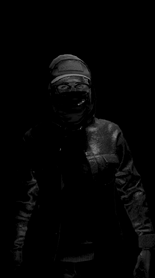 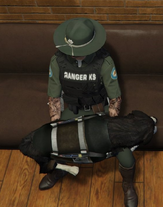 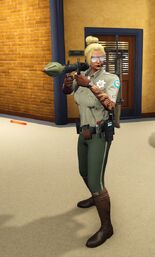 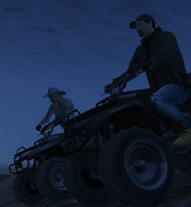 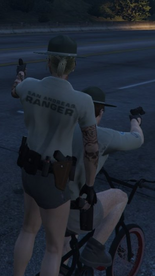 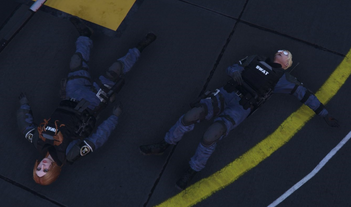 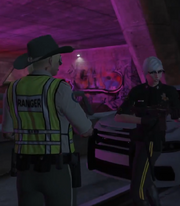 Bancroft no longer a Liability to Angel 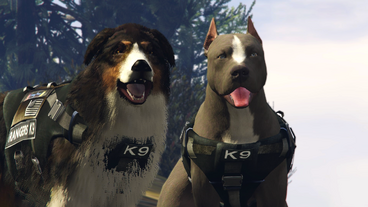 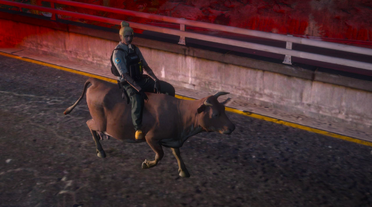