Lydia Vale is a character role-played by CathFawr.

Lydia Vale is an Officer for the Los Santos Police Department, Badge #460.

She was previously a Corrections Captain and Field Training Officer for the Department of Corrections, Badge #767.

Vale experienced the brutal true nature of humanity when serving the British Army abroad. She's reluctant to disclose the full extent of her experiences, but it's clear they've had a lasting effect on her. She is a natural leader, who will take the initiative and wrest control of a situation if it's appropriate, and the opportunity presents itself. She is respectful to authority, but will make her opinion known if she feels it has value or will increase the chance of success.

It's unclear as to whether she feels correctional facilities actually serve any purpose, or whether people who commit the kinds of acts that result in long term incarceration can even ever be reformed.

A former UK Soldier, Lydia now lives in the US and worked for a time on the vintage firearms circuit out of Nevada. She served two tours in Afghanistan, and a third tour that she doesn't discuss. 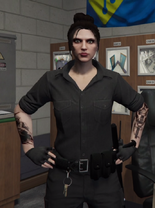 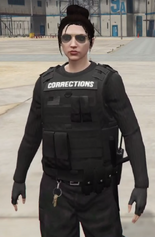 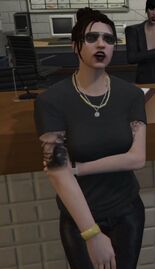 Old Look - Casual Wear
Add a photo to this gallery

Retrieved from "https://nopixel.fandom.com/wiki/Lydia_Vale?oldid=56768"
Community content is available under CC-BY-SA unless otherwise noted.