Lucky Calder is a character role-played by ARustyTrekkie.

Lucky Calder is easily recognisable by her messy brown hair, big round glasses and a fashion sense that makes your eyes water. When not on her own wheels she is behind the steering wheel of her bright yellow dilettante called BRUM. BRUM is fitted with hand controls which enable Lucky to drive.

Lucky Calder is originally from England. She moved to Los Santos after throwing darts at a map and the only one that hit land was one that landed on Los Santos. The rest were in the ocean or imbedded in the wall around the map.

Lucky uses a hospital wheelchair to get around as she cannot walk. The airline she travelled with to Los Santos lost her manual wheelchair and thus she was in a desperate situation when she arrived. Fortunately she encountered a doctor early on who was able to help her out with the temporary hospital chair solution. Which sadly she still relies on till this day. Having to replace the chair every 30 days as the weak chairs get damaged rolling around the city.

Lucky refuses to break any driving laws except in emergency situations. She is very scared that her drivers lisence may be taken from her and she will loose a lot of her independence. So she doesn't speed or run red lights. Despite this BRUM is a regular visitor to a mechanics shop and is rarely seen in a healthy condition.

Lucky has a pet bunny named Monty. Monty loves the rain and running and splashing in puddles. He is very mischevious and enjoys jumping on the bonnets of cars, ontop of tables and eating wallpaper.

Lucky lives with her roomate Honey Dew in Harmony.

While not officially related Lucky considers him to be and introduces him to others as her brother. They met while Lucky was gathering signatures at the bank for a more accessible Los Santos. Lucky was then a victim of a hit and run. Lucky really appreciated the effort Josh put into trying to find the culprit and thus made every effort to be a good friend to him in return. Lucky could see he was struggling in the city and wanted to help in her own way by friendly kidnapping them on various adventures in either BRUM or Josh's car (as named by Lucky) Captain.

Lucky asked Josh to be her brother after she realised thats how she thought of him on the 7th anniversary of her accident. (11/04) The accident where she lost her mobility and her father figure, Uncle Jim. With her reasoning that she had always considered Jim to be her dad but had never told him. So she's making sure she's not repeating her past mistakes by inviting Josh to be her family and brother. 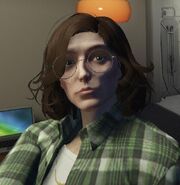 First day in the city