Lubov "Lulu" Zvereva is a character role-played by Dzarekk.

Lubov is pretty optimistic person, but with her past weight she sometimes getting to worried about small troubles and problems. She can even have panic attacks, but they are really rare and could be summoned only by one of her main fears. Lubov doesn't love talking about her past at all, but this doesn’t mean she won’t open it to someone.

At first, she might seems pretty closed to any talks, but when you get to know her better you will understand how cheerful and pleasant she is in conversation. She is pretty careful person when we are talking about befriending someone and trusting them. Lubov is always full of hope and love, even after everything that happened with her.

The other side we can cover about her is that one of her passions is music! At first as a child she was pretty annoyed that she had to learn how to play guitar and piano, learn how to read notes and how to sing. It was pretty hard to understand the future value of those lessons to a small girl, but nowadays Lubov treasures those lessons as one the most important things to her. That’s why she usually walks around with her ukulele- so she could stop, take her time, find a good and safe place and just sing for herself. Her passion in music always helping her calm down and lighten up her adventures!

Lubov is a really responsible person, who is taking her tasks really serious. This could cover all of the aspects of her life. She always has a feeling of keeping under her small control, just so she won’t stuck in any situations. She would always keep her small notebook inside of her backpack to write down her thoughts, plans and important discoveries. That why Lubov is not someone who can easily waste her money that she earned. Usually, she would have her own notes of everything she earned and how much money she used. But sometimes she could lose her guard down and when we are talking about animals and their comfort, Lubov won’t be thinking twice and sometimes will make irrational choices in order to keep animals happy!

Lubov was born in small city Noginsk, which is not that far away from the capital (Moscow). For as long as she remembered herself, she lived in a small flat with her big family which consists of her father, her mother, 2 younger brothers and 1 younger sister. At a young age she was taking care of her younger brothers, while her dad and mom were trying to get money at work. Because of that Lubov grew up a little bit earlier than other kids to become a good helper for her family.

She was alright with being blamed and used, maybe because she was too weak to say something against it, or she just hoped that this would be the way for her to become closer with her friends. But this had to stop and one story helped to open her eyes. One day Lubov find strength to stood up for herself and protect a dog from her "friends". Because of that story, she finds her main goal in protecting ones who can't protect themselves, as she felt something familiar in them.

She always felt ignored and unwanted to her father, which left a harsh scar on her soul. Her mother was really kind person and as someone who would do anything for her family, she thought Lubov everything she knew! One year the situation in her family became pretty bad. At one point when her dad was really drunk and got into another fight with her mother, something happened. Lubov having troubles remembering this dark moment, but she could remember the sound of broken bottle, her mother scream and blood on the floor. For a really long time Lubov was blaming herself with what happened to the family and even tried to let go her goals and dreams, because she thought she was too selfish. Lubov lost her mother at the age of 18. At that point she was so afraid to be there with this monster any longer, so she made the most reckless decision and ran away. She found herself on the train to Moscow.

She applied for the studies in medical university to become veterinarian and graduated with special degree, but her fear of blood couldn't get her any job, so she forgot about her dream and started working as a music teacher like her mother for several years, until one of her friends that she met in medical university contacted her and offered her to fly with him in America and work there as veterinarians. She earned enough money for visa, one way ticket to America and with a new hope and light in her life made her first step into new adventure the rules of which she will make herself! 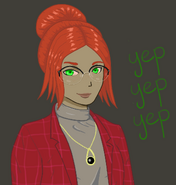