Correctional Officer
Lily Pond is a character role-played by LadyHope.

Lily Pond is a Recruit for the Los Santos Police Department, Badge #R-5.

She was previously a Correctional Officer for the Department of Corrections, Badge #724.

Lily Pond, a strong headed woman who was born and raised in London. Growing up she was used to the fast paced, noise and ever changing ambiance that was the big city. It kept her quick-witted and adventurous when it came to trying new things, so when she met Brendon in University who was from Los Santos, their personalities matched right away. He was used to the same kind of crazy environment she was. When he had to move back after they graduated, Lily decided to save up to be able to afford to gain her citizenship and move with him. After 3 years of dedicated savings, she moved out to LS and couldn't wait for their new adventure to begin.

Shortly after moving in with him, he was killed in a house robbery gone wrong. The intruders entered their home around 2 am and woke them both up after knocking over a lamp in the living room. Brendon went to check, armed with a bat, but was shot by the robber after his presence spooked him. Lily had to watch, helpless, as the consequences of crime caused her life to forever change. While she’s been in therapy and worked to recover from his loss, she decided to look into doing what she could to join the justice system and keep her life going in LS.

She moved to a different city and started her carer within the PD there. Lily was an officer for around 9 months, however decided to quit to move back to LS and start her carer here. 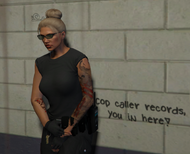 Lily Off Duty
Add a photo to this gallery
Retrieved from "https://nopixel.fandom.com/wiki/Lily_Pond?oldid=63514"
Community content is available under CC-BY-SA unless otherwise noted.