Lilith Ailhart is an Australian woman of 25 years of age. She moved to Los Santos on March 20th 2021.

Generally quiet and passive at first impression. Lilith tends to participate in conversation by simply observing and listening; this is mostly due to her being shy in nature. Getting to know Lilith you will find underneath the many layers of her deceivingly awkward demeanor is a feisty and boisterous personality that she only reveals to those she feels comfortable with. Since her arrival to Los Santos she has developed sudden outbursts of rage due to the locals in the city.

Lilith was hired by Kian Mercer, a close friend of hers, to be a bartender and a booth worker for Mirror Park Tavern. She is a dependable person who is able to handle multiple tasks on a daily basis. She is quickly being recognized to be a reliable part of the group after some time working for the tavern, especially by Andi Jones, Kian and later Siz. This was originally demonstrated for being the beef stew connect for the HOA leader Siz Fulker. Naturally after being closely involved with the tavern people, she was asked by Siz to be a lookout for one of their meth cooks and later for Flippy and Freddy's public meth cooks as well.

August 25, 2021 while attending the Mirror Park Tavern booth on Dean's World, she was approached by Andi and was offered a heartwarming invitation into the HOB as a prospect for the HOA. She accepted the invitation with heartfelt pleasure. The very next day Andi and Kian held an official ceremony that took place in the crypt alongside other HOB prospects like Gillea Taylor, Luis Fernandez and Joey Toes.

On October 8th, 2021 Lilith was made into a full-member of the HOA after Andi Jones and Siz Fulker saw her proactivity and eagerness to help the group out when it comes to the group's general activities. She became the HoA's new primary cook after the group's warehouse got raided and them being connected to the penguin-2 strain. Her strain name is 93-chicken, formerly 93-penguin. She achieved 100% purity on her strain.

Lilith in her HOA Kutte 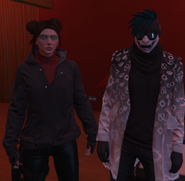