Leslie Ling has a pathological need to win. His solipsistic definition of truth means he's more concerned with undermining others than constructing coherent or cogent arguments. He has a hatred for Chinese people, but also sometimes disguises himself as a Chinese Doctor named, Dr. Mr. Chow. He is extremely petty and will meticulously plan crimes/acts of revenge, however, he severely messes up when his plans come to fruition.

As opposed to many citizens in Los Santos, Ling has not had his memory wiped, keeping his infiltration skills and knowing what everyone were like in their previous life. Currently he is the owner of Premium Deluxe Motorsport, which makes him one of the most powerful man in the city by its own merit.

Leslie Lingberg was originally born in South Korea but eventually broke into the borders of North Korea where he lived there in the mountains till the age of 12. He was raised in the forest by wolves. Raised by 3 wolves 2 black ones and a white one. One day he jumped into a big truck were it took him down to the harbor, they put him into a shipping container and that is how he arrived in Los Santos. YouTube Clip

Leslie has been a close associate of Robert Spowylamywanowski and Pillbis, engaging in countless antics with them and forming a gang called The Nut Boys while on a fishing trip with them through a blood pact. The gangs main goal is to take down the international terrorist known as Mark White, who has been a stone in the groups side for most of their life, trying to ruin Robert's life and employment. Robert is friend with three of Leslies personas, not knowing all of them are Leslie, running to Leslie to solve most of his problems. As such Leslie has taken a role as Robert's mentor and guardian, using his amazing ability of infiltration and espionage to keep him safe.

Robert, having trust issues with his best friend Pilbis, tries to make it into Four Tee's friends list ranking higher than Pilbis, with the hope she would tell Robert what Pilbis thinks of him behind his back. Unaware of Four Tee's mental state and issues, he ends up asking Four Tee for favors, which is something you should never do. After doing so, he asks Leslie for help to fix the issue, which ultimately ends up with Pilbis having to choose between Four Tee and The Nut Boys, with Four Tee declaring that Pilbis can choose them but no matter what she will make sure she is Pillbis' only friend.

During a heartfelt moment, The Nut Boys shared their deepest darkest secrets with each other, with Leslie coming close to revealing his identity as a master of disguise but never actually doing it, he bonds with the group by sharing with them how he got HIV and has botched his own circumcision, making him an eunuch. Besides Salem, The Nut Boys are the closest to knowing Leslies true identity.

During a secret meeting of The Nut Boys they decided they needed to fight news with news and brain stormed a idea to combat Mark White (code name the Nutcracker). And “The Daily Nut; Nutting but news” was formed. The first idea they came up with was shockingly to film a fake video framing Mark White of running over a cripple portrayed by Robert Spowylamywanowski. After doing so - and grieviously injuring Robert in the process - Robert ends his shift as night manager, completely unaware that the last person he served that day was The Nutcracker himself. Leslie, feeling progress is being made at a pace to slow for his satisfaction, decides to take take the reigns, and sets on a mission to find the elusive Mark White and learn more about them.

Dr Mr Chow is a Chinese doctor that Leslie sometimes utilizes to get access to medical records etc, people would note expect Leslie to go undercover Chinese hence how Dr Chow was born.

Harold Baxter is a Cambridge Lawyer graduate with a masters in business. Considered by many the top expert on corporate law.

Tic Tack is from Mexico, having a very poor upbringing led him to use gangbanging as a mean to keep food on the table for the family, especially his abuelita who he would do anything for.

In opposition to his nickname, that should actually be "the witcher", The Hunter has encyclopedic knowledge about forces beyond our own realm and as such his main objective is to protect humanity by sending these mythical beings back to wherever they came from.

Robert can be considered one of Leslie's best friends, depending on Leslie without Robert ever even as much as showing willingness to repay or having the ability to. He is Leslie's protégé and a founding member of The Nut Boys.

Leslie has rubbed off quite a lot on Pilbis, with him taking his first footsteps in infiltration and espionage. Even though he has a tendency to fail, he seems to be somehow skilled on this matter, leading vality to Leslie's claim that Pilbis was his long lost son. He is Leslie's protégé and a founding member of The Nut Boys.

Salem is Leslies employee in Premium Deluxe Motorsport and his most trusted confidant. Extremely loyal and reliable, and a man with a heart of gold, he is the only person that is aware of Leslie's knack for disguises, infiltration and espionage.

Leslie sees Paris as a hooker only trying to take advantage of Robert Spowylamywanowski's money and status. Much of Mark White's consists of Robert and Paris in suspicious intimate activity. An ace card handed to The Nutcracker by Paris.

Mark White do the same thing in two different worlds, they are the yin to the other's yang. While Leslie shows loyalty to family and friends Mark White's only lies with money. He somehow keeps getting footage of Leslie in situations where he's compromised yet no one in seems to know what he looks like. Them being the two best Intelligence gatherers in the city bar none while their loyalties stand in polar moral opposites - can only have one outcome. 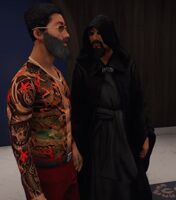 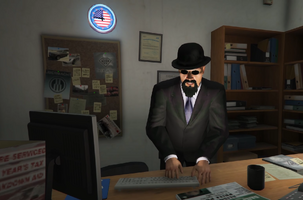