Yes? (cut off his own dick)

Chief of Espionage and Infiltration

Leslie Ling is a character role-played by Nidas.

Leslie Ling has a pathological need to win. His solipsistic definition of truth means he's more concerned with undermining others than constructing coherent or cogent arguments. He has a hatred for Chinese people, but also sometimes disguises himself as a Chinese Doctor named, Dr. Mr. Chow. He is extremely petty and will meticulously plan crimes/acts of revenge, however, he severely messes up when his plans come to fruition.

Leslie Ling is a member of the Korean Mafia. He also works with Alabaster Slim behind the scenes with the Vanilla Unicorn Strip Club as "Chief of Espionage and Infiltration." Considered the eyes and ears of the city and excellent at gathering information.

While meditating in the foothills of Nepal, Leslie determined that the best way to undermine mainstream reality and proliferate his own worldview was to create his very own news agency. Leslie's dream was, in his own words: "To one day be as loved, respected, cherished and feared as the GOATS: Kim Jong Un, and, of course, Alex Jones."

Together with Dale Redford & Ahmed Farooq they set out to create the best and most honest news agency of all time "Real News Only™." However, the career quickly took a turn as almost every story was heavily fabricated in lack of bigger scoops. Leslie, together with Dale and Ahmed made a great trio together, going undercover and actively exposing different crime syndicates.

Once RNO was laid on ice, Leslie continued his own efforts - working in the shadows as a private investigator for big hitters, such as Troopers Jackie Snow and Tony Andrews in the Los Santos Police Department. Leslie will actively go to great lengths (see: The HIV Incident) to get what he wants and therefore in many ways is the ultimate investigator.

He spent three weeks planning to give Al Saab, HIV after Saab accidentally rammed his Cavalcade.

In order to procure a vial with HIV-ridden blood he murdered another Asian man, Mr. Chow and claimed his identity for two weeks. He then paid Buck Colton to announce that the world renowned AIDS doctor Dr. Mr. Chow was going to arrive at the Pillbox Medical Center.

As he had achieved an alibi and surrounding belief, he went to the hospital under the disguise of Dr. Mr. Chow in order to retrieve patient records of people in Los Santos that has HIV, he was however denied promptly and was told to attend medical school and come back in three years. However, Leslie did not have three years.

He snuck in later at night and stole the records, revealing that Eugene Zuckerberg was the patient he was looking for. So he set up a meeting as Leslie Ling and arrived as the middle man, Dr. Mr. Chow and purchased a vial of blood from him.

A week after Edit

Leslie called Saab inquiring to test drive a vehicle. Saab, at the time working at the PDM, agrees. However on the test drive Leslie had planned in advanced with a goblin disguised Otto Delmar to hijack the vehicle with both of them inside. The vehicle was hijacked and taken to a hidden warehouse, after a while Leslie revealed to Saab that Leslie was not being kidnapped, however Saab is. Leslie then goes on to unravel the whole far-fetched three-week plan to destroy Saab's life, all over a vehicle accident. However, he slipped as he approached a tied up Saab, injecting himself and causing his own contraction of HIV.

It was later revealed to Leslie that the vial he had used was in fact not Eugene's blood, it was Alabaster Slim's - however Leslie decided to keep this a secret to the rest of the world, as he realized he would get more discounts and benefits from being able to claim that he was an HIV patient.

In the interest of business and making some extra money he agreed to sell his kidney to Ricky Robins. Ricky agreed to pay Leslie $500 (of Leslie's own money) plus an additional $20 for his kidney. The kidney was needed for Chips Ahoy, who had a failing kidney due to drug abuse.

Melbert Rickenbacker would perform a kidney transplant in an abandoned repair shop. Leslie and Chips nearly died but now Chips has a new HIV infected kidney. Ling would later reveal to Chips that he planned to give him HIV all along in retaliation for what Chips' mother did to him. 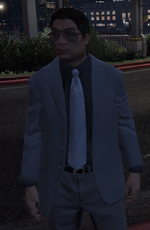 Leslie Businessman
Add a photo to this gallery
Retrieved from "https://nopixel.fandom.com/wiki/Leslie_Ling?oldid=41802"
Community content is available under CC-BY-SA unless otherwise noted.