"Listen, if you're with me and we're gonna go all the way, Lean with me." ― Avon Barksdale

The Leanbois are a Los Santos gang. They are involved in most criminal activities; from robbing banks, drug and gun dealing, gang wars.

The Leanbois formerly maintained a presence* on Lean Street (Grove Street), before selling that territory to the East Side Ballas, as a settlement to end a war with them. They currently have no Southside territory.

* The current future of the gang is unknown

The Leanbois were formed in the summer of 2017, by founding members Avon Barksdale, Lang Buddha, Tony Corleone, Bob Coolidge and Al Saab.

Avon was the one who came up with idea of naming the gang the "Leanbois".

The Return of Avon

Avon returned to Los Santos with the intentions to gain a more significant presence for the Leanbois, while reuniting with original members; Buddha, Tony and Saab.

They planned also to grow in numbers, this resulted in the Leanbois recruiting Eddie Delish, after being associated with the gang for some time.

The Leanbois heard about cocaine being sold around Los Santos, and were intrigued by it. This led them to them meeting Otto Delmar and Joe Caine, who provided them with cocaine.

But there was a lack of trust and hatred when Saab first met Jaclyn "Jackie" Hyde at the dance club in Vinewood, where Saab went up to Jackie, as he took an immediate interest in her. Later that day, Jackie befriended Otto, and despite Saab's efforts, he was unsuccessful when she eventually chose Otto over him.

This caused a lot of tension between the Leanbois and Otto, and this only worsened when they decided to take Jackie from work, as hostage in a bank robbery. Otto, came into town and heard about it, went to Bolingbroke Penitentiary, and proceeded to shoot both Saab and Buddha in the kneecaps. This event resulted in Jackie getting kidnapped by both Saab and Buddha, as they wanted to use her as leverage against Otto, who had told them that he didn't care about her.

This turned out to be a lie and led to Jackie being killed by Buddha and Saab.

When Otto heard about Jackie's death, and that the Leanbois were somehow involved in it, he retaliated by kidnapping Saab; and proceeded to drive to an abandoned farm and force information out of him. When Joe got to their location, they hauled Saab inside the car, without knowing that Tony was getting reinforcements, after finding them under the shed. Under one of the Los Santos bridges in the sewers, they started to plant large amounts of cocaine and guns on Saab, with Joe, Yung Dab and Frankie Scaletta. They all shot at him before firing shots in the distance, and leaving him there for the police to find.

The Leanbois started to make a plan to take down Otto by planting C4 in his car, and setting it up ablaze. In order to distract Otto, Avon set up a meeting in front of the courthouse to have a face to face discussion, which neither had any intentions of doing so. When Otto didn't show up, Saab, on top of the crane, spotted Otto on a roof opposite the courthouse, and told them what happened.

Moments later when they came down from the ladder of the roof, both Otto and Joe got shot at by the Leanbois hiding in the bushes. The feud seemed to have died down, but there seemed to be visible signs of animosity towards the two parties whenever they would encounter each other.

While looking for Otto, they found his right-hand man, Joe, standing outside the new apartments by the coast, alone. This encounter resulted in Speedy, Buddha, Ricky and Denzel kidnapping Joe, and threatening to kill him, unless Otto paid them $150,000. Otto held up his end of the deal, paying the Leanbois off with seven bricks of cocaine.

Afterwards, a friend of both the Vagos and the Leanbois, Siz Fulker, bought all seven bricks of cocaine.

The Disappearance of Avon and Recruiting

The Leanbois became increasingly inactive, due to the disappearance of Avon and Eddie. Other members were also doing various things, and suffered the fact of not being around at the same time. Because of this situation, it was hinted through others that the Leanbois were breaking up, though this was not the case.

Buddha, Tony, and Saab decided to have a conversation about the current situation of the Leanbois. They decided to try to hold down Grove Street more consistently, and planned to start recruiting more members.

They decided to recruit Ricky Robins, Curtis Swoleroid, Denzel Williams and Ellie Dono. After proving themselves by going to war countless times, Curtis, Denzel and Ellie were made official Leanbois by Buddha and Tony. Ricky was never made official, as he stopped coming around.

The newest members also held down territory during turbulent times, when other members were not in the city. The Leanbois were stronger than ever, and looked to expand their reach in the South Side.

The Leanbois started an altercation with the Misfits over their trap house, which lead to a few days of shootouts. Eventually the Leanbois gained access to the trap house.

After a week, the city opened a Taco Shop, and removed the trap houses. The Leanbois planned to run the shop, as did the Vagos; and they decided it would be beneficial to run the shop together.

The Leanbois started running large amounts of weed and cash through the shop. They started making a lot of money, but it also caused issues with other groups and people who wanted to be involved with the Taco Shop; specifically the Misfits, eventually leading to the Taco Shop being shot at. The Leanbois started responding, and having daily shootouts with the Misfits.

At Odds with Chang Gang

The Leanbois and the Chang Gang have had a healthy relationship with one another for a very long time. However, tensions became worse after the following events between the two organizations:

The Leanbois, with the help of the Vagos (mostly Flippy), waged war against the Chang Gang. The relationships between the two gangs deteriorated to the point where Chang Gang actively gunned people down if they were in the same vehicle with any of the members of the Leanbois.

After several car firefights and skirmishes (mostly ending in Chang Gang's favour), the Leanbois and Chang Gang met in Paleto for a foot fight on March 24th, 2020. The tense six-on-six shootout lasted 40 minutes, with the Leanbois securing the win, only losing one member in the fight.

The LSPD rushed the Leanbois in the aftermath, pursuing them to Grandma's House. Another shootout ensued, involving Leanbois, Chang Gang, and the LSPD.

Big D vs Ellie (the Maze)

The war continued with the arranged one-on-one fight between Ellie and Big D in the hedge maze. The fight ended with Big D's victory.

Following Paleto and the Maze fights, both gangs came to respectful terms and ended the conflict (Chang Gang won the war.)

Conflict erupted again when Chang Gang heard Eugene had "loose-lips" about warehouses, and had name-dropped Vinny Pistone as the manager of the warehouse business. In response, Chang Gang kidnapped Eugene, and his fellow Leanbois, and shot them.

After this, an 18 hour war broke out, in which Chang Gang and the Leanbois had two main fights; both won by Chang Gang.

Several hours after the second fight between Chang Gang and Leanbois, Buddha surrendered via the radio to Mr. Chang.

Chang Gang (Chang, Vinny, Ramee and Randy) met with the Leanbois (Buddha, Tony, and Eugene) at the airport to discuss terms of surrender. After an hour debate with various offers and counters, they came to an agreement.

Chang Gang would purchase Lean Street's cul-de-sac for $2 million, and receive ownership of the Comedy Club, Leanbois' "Tier 2" warehouse, and Tony’s Spaghetti Factory. Chang Gang also had to agree not to interfere or retaliate in the conflict between the Leanbois, Curtis Swoleroid, and Juan Carlos "Flippy" Hernandez.

The official exchange occurred on July 20th, 2020, ensuring everyone was available, and lawyers drafted up an official contract.

Grove Street and the South Side Ballas

Tensions were eased a bit, and the two gangs reached more of a compromise, after Big E became the leader of the South Side Ballas.

War with the South Side Ballas

The cul-de-sac was sold to the Chang Gang, and they sold it to the East Side Ballas, who now have the cul-de-sac as their territory.

Losing Lean Street (Grove Street) to the East Side Ballas

On August 25th, 2020, the Leanbois made an agreement with the East Side Ballas, and sold them several of their houses on Lean Street (Grove Street) as a way to end the war with them.

The East Side Ballas now have the rest of Grove Street as their territory, and the Leanbois have now lost their Southside territory.

On September 8th, 2020, Al Saab, Ellie Dono, and Denzel Williams fled to Mexico, with the help of Kanye Mushkin. Prior to their decision to leave to Mexico, Denzel had to tie up many loose ends.

Denzel shot down Apples and Louis Baton, resulting in Louis' death. Afterwards, the Leanbois kidnapped, shot, and blew up Lauren Forcer with C4, at the very same spot that her lover, Michael Dias, was gunned down by Denzel in November of 2019.

It is unknown whether or not they will be coming back to the city. 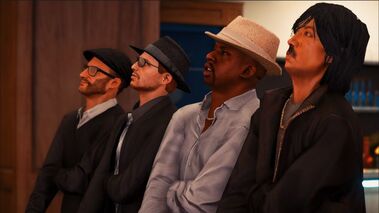 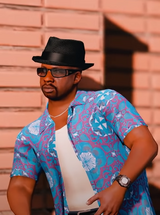 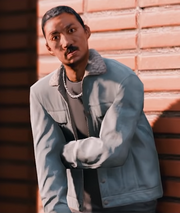 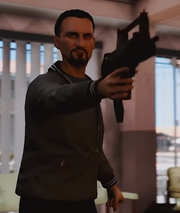 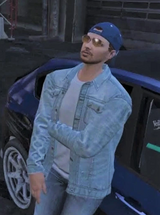 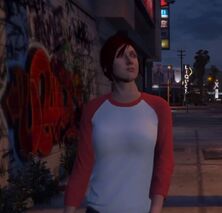 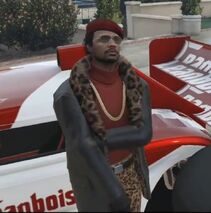 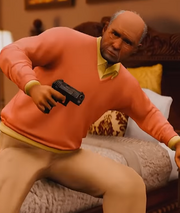 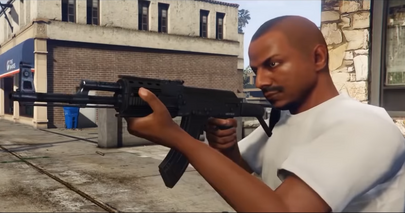 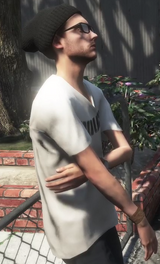 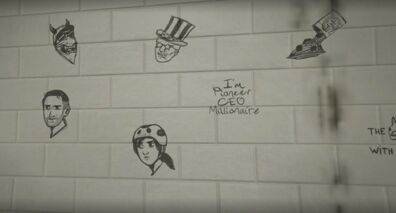 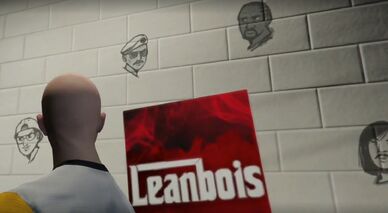