Lea Nova is a character role-played by rerolldota.

Lea Nova is a Corporal for the Paleto Bay Sheriff's Office, Badge #353.

Nova is a Caucasian women with long black hair, which she occasionally dyes purple. She has a eyepatch over her right eye and a tear drop tattoo underneath her left one. She usually wears a sheriff hat with her hair tucked in and purple-tinted sunglasses.

Nova is in a relationship with the specials prosecutor Alexandra Carlson.

Although they are in a monogamous relationship Nova had on multiple occasions tried to convince Alexandra that they should start a harem, which she has strongly denied every time. Even with her protests Nova has been taking application for the harem and has stated that there are over 20 applicants. Currently know applicants are: Demi Black, Cindy Tipton and Jenny Ondamic.

Nova has heavily pushed for Demi to join the harem. She has admitted to being attracted to her and has even suggested that she would be ok with Alexandra cheating on her with Demi and has pushed for Alexandra to go on a date with her.

Nova is a huge chair-leader for the BCSO and Kyle as a leader. Both have work closely together since she joined the PD. She replaced Claire as Kyles personal enforcer after her attempted switch to the LSPD.

Nova in the old PBSO uniform 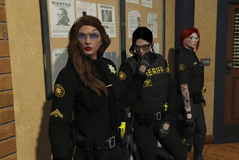 Nova with Her wife and Bobbi

Nova in her off-duty outfit

Nova in the old BCSO uniform

Nova in the old BCSO uniform

Nova in the old BCSO uniform
Community content is available under CC-BY-SA unless otherwise noted.
Advertisement