Laurel is from the North West of England where she had her own Private Investigations business. Her career mostly consisted of tracking missing persons and finding cheating partners for their supposed significant others. After a severe beating from someone who didn't want to be found, Laurel was hospitalised where she received treatment for head trauma. She doesn't remember too much about it.

Not quite as on the ball as she once was, Laurel is a bit confused at the best of times and is usually following or spying on someone whether they be real or purely fictional. She likes to question people and hide in bushes with her notebook and surveillance equipment. 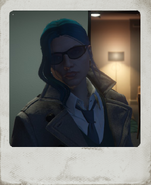 Add a photo to this gallery
Retrieved from "https://nopixel.fandom.com/wiki/Laurel_Ann_Hardeane?oldid=133467"
Community content is available under CC-BY-SA unless otherwise noted.