Lars "Bjorn the Barbarian" Haverford is a character role-played by Biotoxz_.

Bjorn is part of The Guild and works at the Rooster's Rest. While "Bjorn" was originally only the name of his D&D character, he has adopted the Bjorn persona as his new self over time, in part because Lang Buddha asked the LARPers to never go out of character again. He now hates to be called his government name, Lars. He is a level 17 barbarian. His full title is Bjorn “Tripod” Corleone the Battle-ready Bionic Barbarian, Attempted Dragon Slayer, Wrangler of the Fingle, Ninja Looter and Former Employee of the Week.

Bjorn is a kind-hearted person, naïve, usually calm and speaks with a deep, monotonous voice. Out of character, his speech is rushed and squeaky. Bjorn treats everyone with kindness and respect unless they give him a reason not to, i.e. by being rude to him or his friends. He has a very low intelligence score (-1) and struggles to pick up on social cues. Many things go over his head. To make up for his lack of intelligence, he possesses a lot of physical strength (+5), allowing him to carry people around and provide security services for the Rooster's Rest.

Bjorn was raised by a single mother who homeschooled him. He longs for stability and structure. This has led to him falling down the religious rabbit hole that is the cult based around the Stormlord. Bjorn cares deeply about pleasing the Stormlord and is willing to do anything for him even if it goes against his own beliefs. As a result, Bjorn is very protective of the Rooster's Rest which he regards as the temple of the Stormlord.

Bjorn "Tripod" Corleone, the Battleready Bionic Barbarian, Attempted Dragonslayer, Wrangler of the Fingle, Ninja Looter, and Former Employee of the Week. Glory to the Cock!

The Honorable Hood Judge Bjorn "Tripod" Corleone, Warden of the North, Survivor of the 9's

After Ellie Dono sold her soul to Bjorn for $1500 she regularly hosts 'champion' fights trying to win it back.

Bjorn has only lost one champion fight to Denzel Williams but because Denzel used handcuffs he still had half of Ellie's soul, he has since won it back.

Bjorn was dating Riley Carter who he called Princess Riley. Their relationship started as a friendship, though Riley quickly fell for Bjorn. Due to his limited social capabilities and lack of romantic and sexual experience, Bjorn initially didn't understand that Riley saw him as more than a friend. This came to a peak when Riley broke with him after an argument. The day after, she confessed her feelings. Bjorn, breaking out of character briefly, never having had a girlfriend prior, was unsure of what to do. He was eventually able to relay over text that he did indeed want to be Riley's boyfriend. They shared their first kiss on March 17th, 2021.

As of May 31st/June 1st Bjorn and Riley's relationship is in an unknown position because of the relationship between Malakai Anderson and Riley, with Riley unsure of whether or not they broke up.

Yeager and Bjorn are Guildmates and close friends, with a caring, strong (and at times homoerotic) relationship.

Yeager has shown great concern sometimes masked with anger for Bjorn. This concern is mostly seen when Bjorn is seriously injured or during Bjorn's emo and alcoholic arcs. Despite his inability to show his feelings, Bjorn reciprocated some of this concern after Yeager's R1 got nerfed and when Yeager has ICU'd.

Both are willing to shoot and kill people to defend or avenge the other.

Tony Corleone is the adoptive father of Bjorn. Both synchronize well with each other, making up a very good team be it in racing or intimidation.

Tony cares for his son even if he vocally disapproves of his sons 'Gayn Banin', going so far as to 'Blast' for his son and even setting Bjorn on fire for a practical joke.

Bjorn is willing to go to great lengths for his father, an example being him pulling a gun to Mr. Kebun's head when he tried to kidnap Tony. Bjorn has since grown and branched out into further criminal activities alongside his Father and Uncles who are always welcoming in him coming along for jobs.

Tori is Bjorn's adoptive mother. She has taken on the role of trying to teach Bjorn about relationships and how to express his feelings, going so far to try and convince him to have sex with Riley.

Bjorn cares about his mother, regularly paying her loans and has put himself in danger to defend her when she is in trouble.

During Bjorn's stint in Bolingbroke Penitentiary for the 9's in connection with the murder of Basem Shahin, Bjorn became good friends with the leader of the prison gang The Pack. Lennon and Bjorn while getting to know each other, realized their similarities whilst Lennon helped get Bjorn through his 48hr hold. This friendship has extended past Bjorn's prison time, with Lennon and Bjorn helping each other any way they can, including Bjorn being one of Lennon's main contacts on the outside.

On October 17/18 Lennon asked Bjorn to talk, Bjorn purposely got caught do he can have a conversation with Lennon, Lennon asked him to aid in the creation of a new mask, the next day Lennon gave Bjorn a letter with details on the mask.

Bjorn's relationship with Andi Jones is a close one, becoming friends with her during her first term as mayor being one of the few people during that time outside of the HOA who was kind to her, helping to push her to perform her music publicly at the Rooster's Rest, and helping her escape from The Chicken Man.

Bjorn treats Andi like family going as far as to help her torture Bassem on behalf of her husband and Bjorn's uncle, Denzel Williams.

Even though Lang Buddha has said to the nerds not to trust Andi, Bjorn still considers her family.

Rat Lord is a Raccoon who started hanging around The Guild when he found them at the tuner shop. He immediately formed a lasting relationship with them. Ratlord seems particularly fond of Bjorn, cuddling with him every chance he gets.

Bjorn has had a good relationship with Speedy for months, both being close to Lang Buddha. Bjorn also frequently supplies Speedy with materials in exchange for things such as thermite, guns, and other things. Recently, Speedy has relayed to Bjorn that he is the owner of a workbench, and if Bjorn needs anything, he can simply tell him and it will be given. Along with the information of the workbench, Speedy has told Bjorn that he has his back for life, along with loyalty to him.

Lang Buddha is the adoptive uncle of Bjorn, and the highest in command in his life. Bjorn calls Lang "Emperor" due to the level of fidelity that Bjorn has for him. The level of fidelity had even increased once Lang Buddha had revealed to The Guild that he was Shadow/The Stormlord. Futhermore, Lang has a brainwashing effect on Bjorn, going as far as essentially making him a sleeper agent. If Lang says "cucumber" Bjorn will throw himself into a rage, putting down anyone who dangers or annoys Lang. Lang has also frequently called himself the true father of Bjorn, feeling that Tony Corleone is an unsafe father.

In the past couple of months, Lang has started to call Bjorn "Lars". He does this due to the fact that Lang thinks that Bjorn has turned himself into a gangbanger, and is no longer a real nerd. This greatly upsets Bjorn, sometimes putting him in a depressive state or causing him to run away from Lang and the family. He does this for his own good, per Lang, and says that he must start going back to his nerd ways, or else he will continue calling him Lars.

Bjorn was sent into prison for the 9's on an investigative hold in Boilingbrooke connection to the murder of Basem Shahin.

Bjorn spent around 50 hours in prison, which was mostly a positive experience for him, Bjorn formed many connections with the Inmates who are in for life, becoming close with many of the Prisoners there.

At 24 hours in prison the Department of Corrections officers were told to let him go, getting into the parking lot before the DoC was told to send him back in for another 24 hours.

Bjorn, The True Leader of BSK

After getting out of his 48 hour hold, Bjorn "got hard" and became a "gaynbayner" (gangbanger, in the words of Tony Corleone). He started repping BSK (or Burger Shot Kings,) and subsequently started yelling "BSKAYYYYYY!" at random points, especially after doing crimes. According to Dexx Martin of The Families, Bjorn is the actual "shadow leader" of the Brouge Street Kingz, and subsequently ended the Families x BSK war.

On October 17th Mike Block kidnapped Bjorn wanting him to pay him $10,000 for the allegedly successful assassination of Judge Alan Crane, Bjorn decided to enter a bet for $10,000 with Mike Block, whether or not Bjorn was a judge.

Mike Block then proceeded to kidnap Kitty Dream and Roy Armstrong to hold a trial for Roy with Bjorn as the judge.

Now with 5 hostages and numerous City Guardsman as witnesses, Bjorn forced to make a decision decided to find Roy not guilty, as he is one of the few officers he likes. this led to Mike running out of the courthouse and stealing Bjorns Cheberuk.

Bjorn gained the title Shadowleader of BSK after He went around yelling 'BSKAYYY' and throwing up GSF Gang Signs, which other gangs found out and went along with the joke because they have more respect for Bjorn than they do for OTT.

Bjorn first started repping BSK after him and the Cleanbois murdered an old metal detector and pretended to be OTT and B$K to keep heat off of CB/The Guild.

Bjorn kept false flagging B$K for months until The Families got in touch with him complaining about OTTs action, he subsequently stopped Repping B$K after the Families vs. B$K war, and subsequent offer to be their shadow leader by Families Gang Member Andrew Jackson.

Bjorn and Riley on a date at Clean Manor 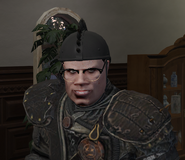 Bjorn and Tori waiting for a race

Bjorn as Yur in a shoot out with NBC

Banes letter Back
Community content is available under CC-BY-SA unless otherwise noted.
Advertisement