Lang Buddha is a character role-played by Buddha.

Lang Buddha is a severe-looking Chinese-American man with a short temper. He is quick-witted and often uses humor to disarm his interlocutors. He is the founding member of the Leanbois (now defunct), the Cleanbois, and Talon. He is the owner of Nest Holdings, which is the parent company of Rooster's Rest.

Buddha exhibits narcissistic behavior and demands respect from everyone he interacts with. He maintains a complex social graph that includes highly illegal criminal organizations as well as high profile business circles. This makes Buddha secretive and paranoid in nature, and as a result, he is a skilled liar and storyteller.

Due to being one of the richest men in Los Santos, and one of the greatest criminal masterminds in the city, Lang has a big target on his back. The extent of his power can be seen everywhere, as he helped get Denzel Williams elected as mayor. This has led to the Police Department, DA and Department of Justice to always keep an eye on Lang. He has made enemies with officers such as Sam Baas, Jack Ripley, Kyle Pred and Randy Wrangler. He is also known to bully cadets, to the point where some officers think it is a rite of passage to encounter Lang in a traffic stop.

Buddha has also become one of the best escape artists in the city, due to his improved driving skills, incredible map knowledge, and improvisation skills.

Overall, his business acumen and connections in the criminal underworld has transformed Lang from a hotheaded Southside gangster in his younger years to a refined business man who is willing to give opportunities to his friends and random people alike. He has created a business conglomerate known as Cerberus alongside Dean Watson and Leslie Lingberg, where they own half of the city's businesses, such as the National Paintball Association, Rooster's Rest, Premium Deluxe Motorsport, and Burger Shot. Unlike rich men in other cities, Lang and the rest of Cerberus like to help out the little guys around them.

Lang's connections have allowed him to form a giant family of criminals and civilians known as the League of Legends.

Lang Buddha was born in China. His grandfather was the head of a Chinese Triad who died after becoming sick. Buddha was intended to take over as the leader, but the Triad didn't consider him ready. His grandmother attempted to take his place instead, but the Triad felt that she would become too powerful and also did not want a woman as their leader.

After being excommunicated, Buddha and his grandmother moved to Grove Street in Los Santos.

Buddha became a taxi driver and met Avon Barksdale, which led to him becoming a founding member of the Leanbois.

Buddha opened a restaurant, Rooster's Rest, to sell tea and ramen and to host social events at the establishment. He initially hired Petunia Brookshire as CEO who was then replaced with Penelope Farthing who is the current CEO of the business. He would remain the owner and brought in Humberto Antonio Donato Pecorino to be the co-owner.

The Rooster's Reef is a legal Marijuana dispensary owned by Lang Buddha. They currently operate out of booths from Deans World and the Andi Jones Farmers Market selling custom Marijuana products. The business has two grow locations one of which is located inside the Nudist Colony which is now named - Rooster's Ranch and a second location on a plot of farmland just off Senora Freeway opposite Grapeseed.

Lang Buddha has since handed full control of the business over to Eve Summers due to Lang not wanting to jeopardise the business if he was caught running Marijuana illegally. Lang frequently let's people know Eve is one of his best CEOs due to never having to micro manage her, hear about any drama or give him headaches.

Talon is a terrorist organization handed down from generation to generation through Buddha's lineage. The current incarnation of Talon is headquartered in the underground area hidden behind a false wall built into the basement of Rooster's Rest. The founding members are Lang Buddha, Ellie Dono, and Denzel Williams, who were join shortly after by Jacob Harth.

The main goal of Talon is to "give power back to the people" and reveal the corruption of the government of Los Santos.

Buddha and the Cleanbois and members of The Guild are currently part of meth production operation. Their first successful batch of meth cured to 82%. Guild Member Gloryon was able to optimize the meth to 100%. After a partnership with the Ballas, Buddha switched to working with his best friend Speedy and the Vagos, a close ally of Lang's since his days in the Southside. Buddha has also started to distribute himself alongside the help of CB, as large exports have become available in the city.

Lang Buddha, Tony Corleone, Mickey S & Raymond Romanov made their way to Burger Shot to pick up food. Lang Buddha entered Burger Shot soon followed by Raymond Romanov and then Tony Corleone while Mickey S had stayed outside. Inside were two Correctional Officers waiting in line for their food, working behind the counter for Burger Shot was Hubcap Jones, Shelly Smith, Naomi Kent and other employees. As usual when placing an order at Burger Shot, Lang Buddha stresses that they don't double charge him as he hates having to pay twice on something that should just be counted as one order. An individual wearing a paper bag over his head who was serving Lang Buddha at the time tried to double charge him but Lang was having none of it exclaiming that "You will regret this" over and over to the employee. Moments later Lang Buddha pulls out his Diamondback Pistol and tells everyone working to put their hands up and not move. Lang then demands the employee wearing the paper bag go bring him free food else he'll blast Shelly in front of him.

As Lang is about to leave two female employees speak up and one of them calls Lang a "Karen", Tony Corleone let's Lang know what was said and this results in Lang demanding to know who said it. Naomi Kent speaks up and tells Lang "do you need money, are you okay?" at that point Lang shoots Naomi twice in the head and proceeds to quickly leave Burger Shot.

Naomi Kent was pronounced dead sometime later after the shooting. Lang Buddha finds out after Tony Corleone had received a phone call from Mel Rickenbacker telling him that Naomi had passed away.

Nearly three weeks after the murder, Lang Buddha was apprehended and sentenced to the 9s for the murder after a failing to rob the Pacific Standard Bank. All properties owned by Lang were raided in an attempt to find the murder weapon, the Police Department found nothing of value but an expired practice laptop. 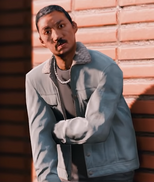 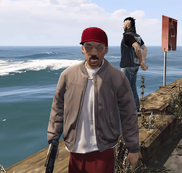 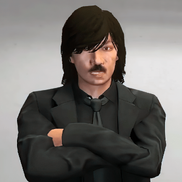 Lang as Shadow holding an RPG 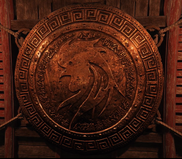 Lang at the beach 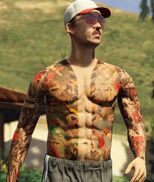 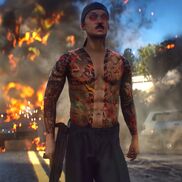 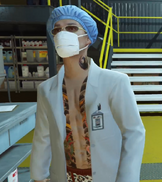 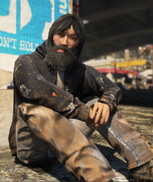 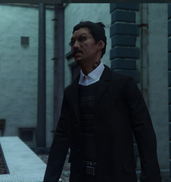 Buddha Suit with a vest

Buddha on Love or Host 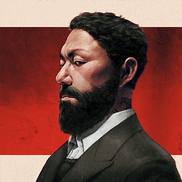 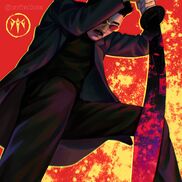