La Flare Davis is a character role-played by JustJambaa.

Before coming to the city of Los Santos La Flare Davis was an average drug peddler in the US (being secretive about his past), the reason being his unstable economic situation and his at the time relationship with a woman he is hesitant to talk about. As revealed to Lola Reinheart when having a heart-to-heart conversation, unsure about what he feels for her.

His past consists of him being forced into the role of a courier for his girlfriend’s drug production and sale scheme, having racked up a living wage from it to the point where they even could afford to maintain a dog who La Flare loved dearly.

At some unspecified point, the police caught notice of the illegal activity they were conducting and held La Flare’s girlfriend in custody for questioning. She ended up pinning the whole operation on him and even goes as far as to set him up for detainment. With all the evidence linking him to the operation he takes the plea deal, his girlfriend promising to wait for him once he gets out of prison. But when he got out all their common belongings were gone, she blocked his number and went as far as to take their beloved pooch.

With only the things he carried, an empty apartment and now a criminal drug manufacturing and sale charge to his name. His prospects were looking understandably bleak.

But La Flare is not one to sit and sulk about his situation.

Promising himself to not be vulnerable in that way again he sells his apartment, deciding to move to Los Santos (seeing it as a city of opportunity and where conveniently his criminal record would not be considered due to state Law).

Coming to the city with a positive outlook on life but keeping wary of his feelings he spent his days keeping a low profile and meeting a few people. But after spending some time in the city trying to keep clean, he soon falls back into his criminal habits, often being confused for a grinder for his questionable voice quality during his early days and his clothing choices.

Hearing about the status of Jean Paul(or X), he found the hacker listed in the Yellow Pages and called him up to ask whether being his hack apprentice would be possible. X obliged and despite the many months of waiting, X finally took the time to buy him some practice laptops to watch him hack and practice. Impressed by Flare's ability to do the hack with no prior practice. X stating himself that the only reason he bothered to mentor him was because he took things slow and "learn things the right way instead of speedrunning it". This eventually lead to his second mentor, Yuno Sykk when X got an express ticket to the Bahamas. Because of these two legendary hackers he had become a confident yet prudent hacker looking for opportunities to prove himself as a criminal each day, even if it meant taking whatever job he can get his hands on. Flare even went as far as starting up a "Hackers Anonymous" group where he would host meetings of aspiring hackers and help teach/train them with practice laptops.

This attitude towards opportunity results in him hanging out with Sergio Lopez, the former leader of Marabunta Grande, and accompanies them patrolling Fudge Lane. This results in them getting in a shootout over a house robbery in which La Flare shoots and robs Tony Corleone and an associate which he did not bother to identify being quite shook by the whole situation and insisting they do not take any valuables from them.

Quickly after the event he asked Sergio to drive him to a clothing store to get changed, trying to blame his behavior on his regular wariness after committing crime and not wanting to be identified by the guys he robbed.

Him knowing Tony was a close friend to Yuno results in him spending a few hours questioning what to do, ultimately deciding to contact Lenny Large to set up a race in which he would talk to Tony and clear out the whole situation.

La Flare arrived at the race extremely paranoid as to what Tony would do once, he learned his identity. Surprisingly, Tony took it well and even went as far as to make him a contact once he learned about him being X’s and Yuno’s pupil, commending him for his honesty and will to make things right.

This would later lead into La Flare doing a few jobs with him, Raymond Romanov, Lang Buddha, and Nino Chavez.

Having decent bonds with the Cleanbois and their associates (being saved by Harry Brown once), he aspires to be helpful to the criminal world using his knowledge as a courier and forger from his past to create OxyContin receipts for “legal” oxy deliveries.

Nino taking great interest in the oxy scheme and enjoying La Flare’s energy when doing jobs decides to make him a regular member of the “morning crew” in the role of the main hacker. Nino now being a sort of criminal mentor to La Flare after he himself had come back from a long break.

After the dissolution of The Obscure Collective and Raymond Romanov spending more time in the Eu/Au time zone, some members of The Collective and the so called Degen crew banded together under a new name, R.U.S.T (also written as Rust). Flares position in the group was that of the hacker and "Son in Command" as Raymond had adopted him as his son sometime around the formation of Rust, this lead to Flare feeling a bit of entitlement for his position but this at the time was justified by his prowess as a hacker. He had amassed a good reputation over the many heists he had participated in when the crew was split under the previous denominations. This meant Flares days as a freelance hacker were over, but on occasion he would hack for other groups to keep good relations and make a quick buck.

After doing many jobs with Santa's crew Rust ends up recruiting Gheto Kaiba and Wren Draider. This meant Kaiba quickly ended up taking Flare’s position as the main hacker due to his consistency and proficiency during the VAR Heist hack as well as his speed on the laptop hack at the time. Flare’s position in the group became then the one of secondary hacker, gun connect and practice laptop provider.

Over time even this position would deteriorate due to the changes in the city, the once biggest provider for thermite and guns during the Eu/Au hours was struggling to get them even for himself. The game masters stopped answering and after Nino leaving Flare was left a shell of his former self. With no connections of his own either in the gun game or materials game after the dissolution of Pegasus, his position of utility during heists taken Flare was now looking for a purpose he could fulfill in the group. The predicament at the time led to tensions in the group even when they were growing and adding new members.

Flare is a talented shooter that sadly gets unnoticed/underappreciated due to his lack of combat awareness. This lack of awareness resulted in multiple miscommunications and trips to ICU. Even while in his purpose searching state he still proved useful during heists by clutching a swap, pickup on motorcycle when needed, or putting down a few opposing gang members in a conflict.

After the first completion of the casino Flare became aware about how much his skills as a hacker could deteriorate if he stopped practicing, specially with the constant updating of security systems in the city. He was determined to prove himself useful during their second completion of the casino. And sure enough he did, he one shot the generator hack saving the crew some time in repositioning. This went highly under appreciated but made Flare feel more sure about his own abilities once again. After the successful yet lower payout Casino, Flare would go to hack a Fleeca and one shot it.

With a reinvigorated sense of self worth and a renewed passion for hacking it is unsure if he’ll reach the point he was at before. Slowly but surely Flare will rebuild his connections and put what his mentor teaches him to good use in both business and crime.

Being amicable to most people and gangs he encounters he has tried to stay relatively neutral, stating himself that he is a “freelance hacker”, after the recent events and his many encounters with the Cleanbois he has warmed up to the idea of helping them in hopes of joining them one day (even though he knows it is a distant goal).

Interpreting his regular and often excessive scuff as a sign that he is destined to join one day the so called “Scuffbois”.

During his early days in the city, he was closer affiliated to Chang Gang but as their interactions diminished and he came to the realization that he would never ascend in rank and would basically serve as low tier oxy runner for them or a fall guy, he chose to just stay neutral to them.

Flare also had involvement with a now inactive organization named "The Obscure Collective", a crew which dealt illegal goods out under complete secrecy. This was then dissolved.

Some members from The Collective then came together under another crew, R.U.S.T, lead by Raymond Romanov, he secured a spot as "son in command" being the adopted by Ray. He is also one of the hackers for the crew.

Gravitating more towards dark outfits and originally keeping to biker helmets and utility focused clothing, his style could be described as tech/tactical wear (explaining why he often gets confused for a grinder). Fun Fact, Flare was one of the first people in the city to adopt using the parachute bag as a "backpack".

He has recently stopped always wearing a helmet, believing it is overdone and out of fashion. (This will surely result in more brain damage from bike crashes while racing)

Still going for the darker outfits and keeping a relatively streetwear like look, sporting a backwards cap and a bandana to cover his face during crime (it also looks cool).

Today you'll most likely see "Flare" wearing an all black suit with his traditional helmet/visor combo on top, aiming for a more professional appearance now that he works upper management for several companies within Los Santos. Flare has gone back towards having his signature "shiny visor" helmet added with a mask that gives the appearance of a visor attached to the helmet itself. Flare is also one of the only people in the city that uses that helmet visor combo and has personally coined it as his own.

Being quite energetic he often catches police officer’s attention, that, and the fact he loves using bikes for getaways often results in him getting caught or completely smoking the cops.

La Flare is very enthusiastic about shooting the cops, claiming he will go “Demon mode” but has yet found an opportunity to do so.

The few times he has shot at people his performance has been decent but as far as elaborate murder, he is not really the murder type. Despite claiming to hear voices and hear demons on occasion. 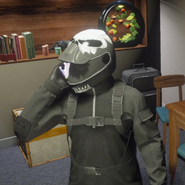 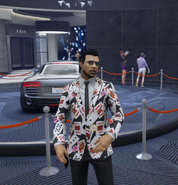 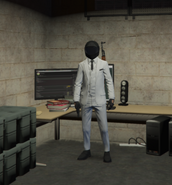 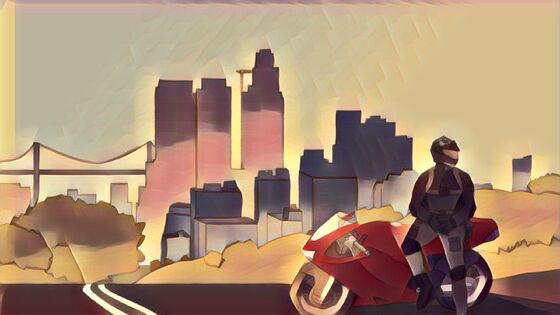 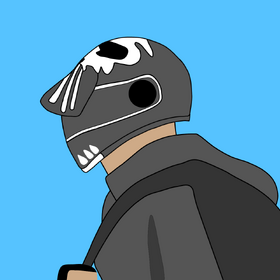 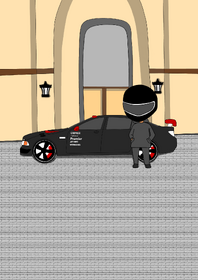 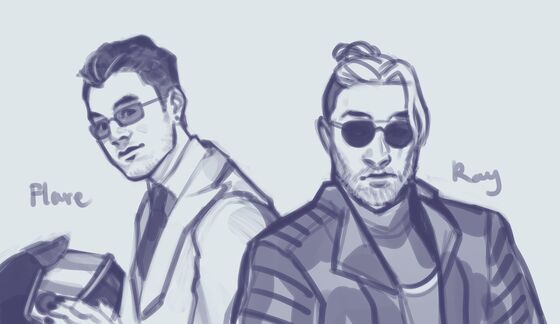 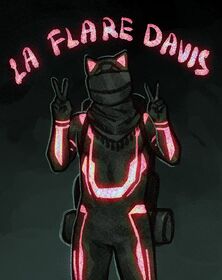 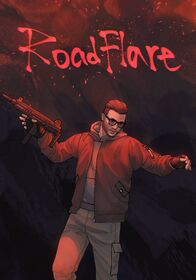 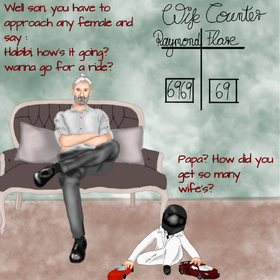 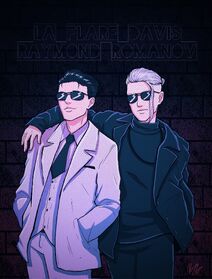